Worldwide, one in three people lacks access to safe drinking water, according to the most recent data from the World Health Organization (WHO). The problem is acute in many low-income urban regions, such as Dar es Salaam, a major city and commercial port on Tanzania’s Indian Ocean coast. Here, rapid population growth has led to 70% of the population living in unplanned settlements where there is no safe water infrastructure. 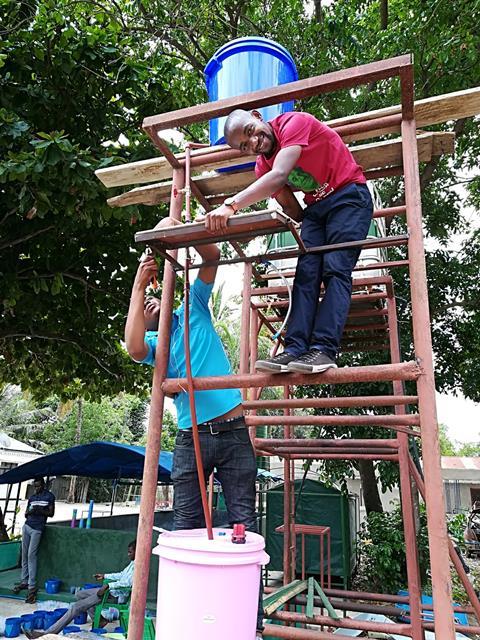 Low- and middle-income populations in Dar es Salaam have come to rely on private water vendors, who either sell unclean municipal water at a high mark-up, or expensive bottled water at a low profit margin.

The system hardly works for anybody, says Michael Coto, co-founder of Majico – a spin-out from the University of Cambridge, UK. ‘The people selling the bottled water are typically small-scale vendors who complain that they don’t make much money, while the people who buy the bottled water complain of the expense of buying it,’ he tells Chemistry World.

Coto is trying to help both parties in this dilemma by providing the vendors with solar powered water purifying kiosks that allow them to produce and sell clean water in their own communities. The idea, Coto says, is to undercut the price of bottled water for consumers, while increasing the profit margins of the vendors.

Majico most commonly uses silver, which has a powerful antibacterial effect. ‘We can produce nanoparticles that are less than 1nm in diameter. That gives us high photoactivity and also kills bacteria exceptionally well.’ In order to keep production costs low, Coto developed a method to heat the material using a microwave or a standard kitchen oven.

With this technique, Majico can build a hub in Tanzania that will manufacture and maintain the systems on the ground. ‘We make the catalytic materials in a frugal way because we try to make it as simple as we can,’ Coto explains. ‘Ultimately, we want to make these materials and the end product locally, in a low-cost setting.’ That’s the commercial incentive, he says, but ‘our social mission is to increase access to affordable drinking water.’

Coto took his initial steps towards building Majico during his PhD at the Cambridge department of materials science. Beginning in 2013, Coto worked on developing and optimising the photocatalytic material that would later become the core of the water kiosks. Keen to build on his group’s science outside of the lab, Coto began trials of the material in Tanzania in 2015.

Initially, these trials involved a water testing kit made of empty Coke bottles and a catalyst in nano powder form, Coto remembers. ‘I found the most contaminated freshwater sources I could to see how much I could clean [the water] with our materials,’ he says.

Coto’s group then moved on from using a powder catalyst to immobilising the material onto a support. Working with partners at Ardhi University in Tanzania, they experimented with various minerals, zeolites, glass and other local substrates such as sand, as well as testing a flow-through system.

‘That was the point where we started considering a social enterprise around the work because the technology readiness was getting more tangible,’ Coto says. Majico was founded in 2017.

Having tested the technology on several field trips and pitched the kiosks to the local community, the Majico team is now working on turning it into a viable business. With the help of the local university and an internship programme, they are designing and building solar-powered water kiosks that are linked to the purifiers. Locals can use the kiosks by paying with cash or mobile phone credits.

In February, Coto and the team are expecting to test the prototypes in Tanzania and run a local workshop in a bid to keep up their community-driven approach. Their goal is to have a product pilot ready by the end of the year and to conduct a small-scale commercial trial in early 2021. The trial would validate the product with investors and give Majico a better chance of getting the financial backing to continue, Coto predicts. As one of the winners of the Royal Society of Chemistry’s 2019 Emerging Technologies competition, they will also have access to support and mentoring to help develop the business.

While Tanzania is Majico’s initial target market, Coto hopes to roll out the water kiosks to other urban areas with a high density of water vendors. ‘We will likely expand across East Africa,’ he says, ‘and in the longer term, we can see the kiosks being used in off-grid eco homes in developed markets as well.’

Origin in a nutshell: social enterprise spin-out from Cambridge University