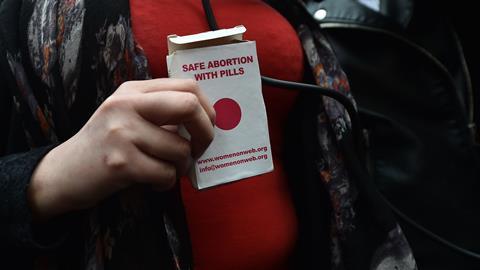 A European charity that provides mail-order medical abortions has pledged to continue providing its services despite a recent order from the US Food and Drugs Administration (FDA) to stop.

Run by Dutch physician Rebecca Gomperts, Aid Access is an online service that posts FDA-approved abortion pills – mifepristone and misoprostol – to women in the early stages of pregnancy in the US.

In its March warning letter, the drug regulator accused the organisation of breaking the law by introducing ‘misbranded and unapproved new drugs’ into the country. The FDA sent a similar notice to another online drug retailer Rablon that ships similar drugs. Earlier this month, more than 100 US representatives wrote to the FDA urging it to pursue these organisations.

‘I will not be deterred,’ Gomperts wrote on Facebook in response to the FDA notice. ‘When US women seeking to terminate their pregnancies prior to nine weeks consult me, I will not turn them away.’

Drug policy experts contend that the watchdog’s move is politically motivated. ‘When it comes to pharmaceuticals, the FDA is caught between three priorities and constituencies: patient safety, politics and pleasing the pharmaceutical industry, and not necessarily in that order,’ says Gabriel Levitt, president of Pharmacy Checker, an online pharmacy verification and drug price comparison company, and founder of Prescription Justice, an advocacy group that fights to lower drug prices in the US. ‘This action against online pharmacies that help women obtain medicines that can safely terminate pregnancies clearly pleases the anti-choice/pro-life politicians and the electoral base of the president.’

Abortion is legal in the US. However, several states have passed laws this year that severely restrict or ban abortion except in a few cases. Moreover, public and private health insurance plans offer scant coverage for abortion, which costs, on average, $500 (£395) in the US. On top of that, there are restrictions on the sale of mifepristone. It can only be prescribed by certified healthcare providers in select clinics.

Gomperts started Aid Access in October last year to help US women. Since 2006, Gomperts has been providing medical abortion information and services to women around the world through another website called Women on Web.

Aid Access offers an online consultation and, once one of its doctors confirms that the woman qualifies for a medical abortion, writes a prescription for mifepristone and misoprostol. A small pharmaceutical wholesaler in India then ships the drugs direct to the woman. Aid Access provides e-mail or phone support throughout the abortion.

Last year, Gomperts had consultations with 11,000 women who approached her with medical abortion requests. Gomperts wrote prescriptions for 2581 of them. A consultation and prescription through Aid Access typically costs €80 (£71), although Gomperts waives the fee for those that cannot afford it.

This isn’t the first run in with the authorities for Gomperts. According to The Independent, Women on Web had to stop shipping prescriptions to Brazil in 2016 because the government started seizing packages.

The FDA refused to comment on its next steps. However, the warning letter noted if Aid Access didn’t comply with the FDA order, it could face ‘seizure or injunction, without further notice’. The FDA could also seek the Indian government’s help. ‘It’s not clear how quickly the Indian government would act against a business that is operating lawfully in India,’ Levitt says, however.

Gomperts is registered to practice medicine in Austria. ‘For the FDA to go after any physician, much less a physician in Europe, for prescribing FDA approved medicines to their patients in the US is unheard of,’ Gomperts’ lawyer Richard Hearn tells Chemistry World. Hearn wrote in his response to the FDA order that ‘the warning letter violates the constitutional rights of Dr Gomperts’ patients in the US’. Hearn added if women with restricted access to abortion services aren’t allowed to obtain them online, they would be compelled to employ unsafe methods to terminate their pregnancies or give birth against their wishes.

The owner of the Indian pharmaceutical company that ships the drugs, speaking on condition of anonymity, says that he is not worried by the FDA’s notice to Aid Access. ‘It’s a conflict between the FDA and Aid Acccess,’ he says. ‘We are following all regulations of the Indian government while exporting medicines. We will continue our support [to Gomperts] as long as legally possible.’