If ever a science fiction movie director were seeking inspiration for how to depict tiny robotic alien life forms, they need look no further than those created by a team of scientists in Bulgaria, Poland, the UK and China.

Beginning as innocuous oily droplets about 20–40μm across floating in water, these structures take on faceted, crystal-like shapes when cooled to around 2-8°C – even though they aren’t frozen. Then things get really weird.

Some of the particles’ facets grow while other shrink, producing a variety of geometrical forms such as kites, isosceles triangles and spiked tetrahedra. Then, from some of the sharp corners emerge tentacle-like strands, as if being extruded from a nozzle. As they grow, the strands bend into undulating shapes – and the droplets start to swim, propelled through the fluid by the tentacles’ extension. 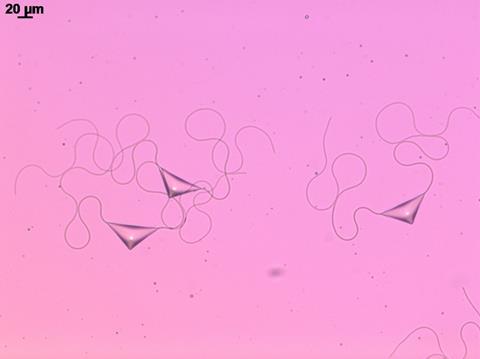 The droplets grow wavy tentacles when cooled, which retract when they’re warmed up again

The researchers first reported polygonal and polyhedral droplets in 2015. They are made from simple alkanes such as pentadecane or tetradecane, emulsified in water by a surfactant coating. The facets appear on cooling because the droplet surfaces develop a thin layer of a loose crystalline phase, in which the alkane chains are aligned but fairly free to rotate. This surface layer is rather stiff, and a complex balance of forces causes it to straighten and buckle into facets.

Then, materials chemist Stoyan Smoukov at Queen Mary University of London and colleagues noted that tendrils could sprout from the droplets’ corners. Now, a team around Smoukov, Nikolai Denkov of Sofia University, Maciej Lisicki from the University of Warsaw and Eric Lauga from the University of Cambridge, has examined how these strands propel the particles. When they first saw this peculiar motion, says Smoukov, ‘we had many questions: where would they go, how and why do they do it?’

The researchers think that the filaments, just a few hundred nanometers wide, are also made from the elastic surface phase. Their calculations predict that, as the strands grow, viscous friction with the water will bend them into undulating forms like meandering rivers. The friction means that a filament emerging in one direction pushes the droplets in the opposite direction.

By slowly raising and lowering the temperature by about 5°C, Smoukov and colleagues can make the filaments repeatedly shrink and grow, so that the droplets will stop or retract and then move again. In effect, the droplets store energy from the warmer environment that recharges them for more swimming when subsequently cooled. 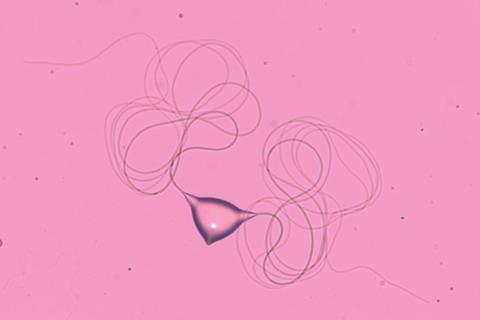 The droplets self-assemble from only three components – an alkane such as pentadecane or tetradecane, water and a dissolved surfactant – and can be observed with an optical microscope with a thermally controlled sample holder

‘This work is astonishing,’ says physicist Tom McLeish of the University of York, UK. ‘The structures remind me of some of the strange filamentous forms of crystal growth for some simple inorganics in the presence of polymers.’ He adds that the swimming behaviour doesn’t look like anything he has seen before in natural or synthetic systems. ‘I have really no idea what is going on,’ he admits.

Daniela Kraft, a soft-matter physicist at Leiden University in the Netherlands, calls the work ‘beautiful’, and says ‘this is a novel type of propulsion mechanism, which makes use of the elasticity of the expelled fibers to create net motion’.

The droplets’ filament-propelled movement is reminiscent of motile bacteria, which swim using whip-like appendages called flagella. Smoukov hopes that their droplets might offer a simple model system for investigating such motion.