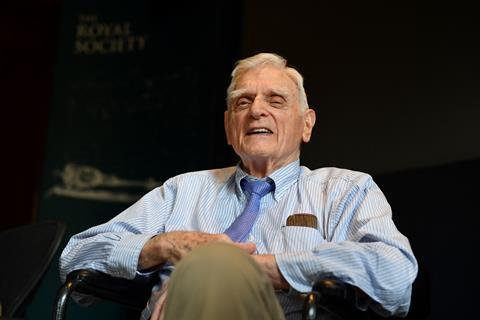 2019 chemistry laureate John Goodenough has certainly had a long life and is set to mark his 100th birthday in July. Having received the prize so late in life, however, he is an outlier for these results

Winners of the chemistry Nobel prize may be missing out on their fair share of an unusual benefit of the premier scientific award – a longer life. Nobel laureates in physics and medicine appear to live significantly longer than their chemistry counterparts.

A new study1 suggests Nobel winners in the sciences – physics, chemistry, and physiology or medicine – live progressively longer than they might have, depending on how early they receive the prize. It shows scientists who win the Nobel prize live about one year longer than the population at large for every 10 years earlier than average they were awarded it.

But it comes after a 2019 study2 into the ages of Nobel laureates that found chemistry prize winners tend to receive the award when they are older.

Taken together, the two studies indicate winners of the chemistry Nobel tend not to live as long after they receive the prize as do laureates in other fields – in fact, it’s a quantifiable phenomenon.

‘Our analysis … indicates that Nobel chemists have only 3.95 extra years of longevity compared to physics (6.19 years) and physiology or medicine (5.9 years),’ says behavioural economist Ben Chan of the Queensland University of Technology, the lead author of the new study. 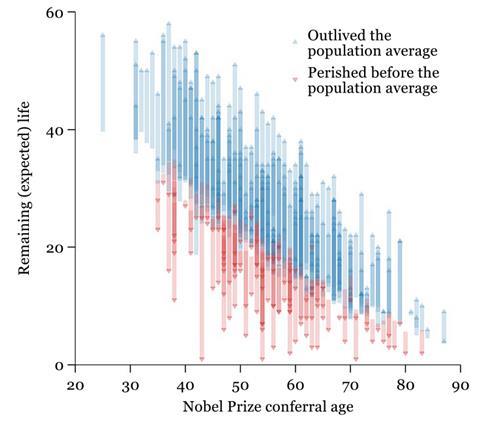 Each marker represents the number of years lived after receiving the Nobel prize. The trail of each marker indicates the deviation between the laureate’s life span and age, sex and country-specific life expectancy

The study reports the statistical effect that winning a science Nobel had among 387 laureates between 1901 and 2000, but it can’t pinpoint any reason for the increased longevity.

It seems likely, however, that receiving such an esteemed award would reduce work-related stress and promote healthier behaviour or happiness, Chan says. Any resulting increases in status and social standing could also result in a healthier and longer life.

And the earlier you receive the Nobel prize, the better. ‘Early achievers are likely to enjoy such benefits, which accumulate through one’s life,’ Chan says.

Physicist and numerical modeller Rasmus Bjørk of the Technical University of Denmark near Copenhagen, who led the 2019 study on the ages of Nobel winners, suggests receiving the prize leads to a less stressful work life. ‘One has basically been “set up for life”,’ he says. ‘No university in the world would fire a laureate, and funding for research will be plentiful for the rest of their academic career.’

Both Bjørk and Chan note the pressure on academics to secure funding by winning awards, and Chan suggests that, because winning the Nobel and other awards has such a marked effect, it might be a sign the system needs reform. ‘One might ask the question whether the current recognition system in science could be improved,’ he says.