Organocatalysis Nobel laureate will give prize money to underprivileged students 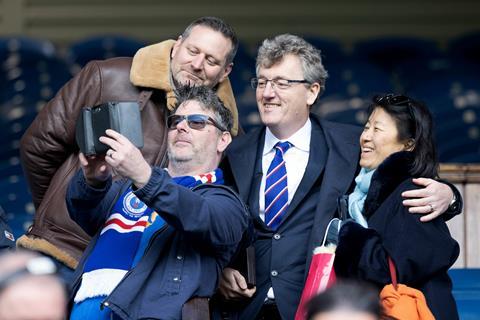 David MacMillan with some fans at the Rangers and Celtic match at Ibrox Stadium on 2 April. The Nobel laureate announced on football programme Off the Ball that he would use his prize money to set up a charitable foundation

Organocatalysis chemist David MacMillan will give his Nobel prize money – around £405,000 – to underprivileged students in Scotland who are trying to get to university, he said on BBC Radio Scotland’s football show Off the Ball.

MacMillan, who now leads a research team at Princeton University, US, is originally from Scotland and completed his undergraduate chemistry degree at the University of Glasgow before moving to the US for his doctorate. In 2021, he and Benjamin List shared the chemistry Nobel prize for developing asymmetric organocatalysis. They each received 5 million Swedish kronor.

This money, as well as any honorariums from talks given until the end of the year, will be put into the May and Billy MacMillan Foundation, which MacMillan said he set up to honour his parents’ support of his education. The charity will support young people who can’t afford to go to university so they can get degrees.

MacMillan may want to hold back $1000 though that he still owes List. When List first told him that he’d won the Nobel prize, MacMillan bet him $1000 that they had both been pranked.