The most complete list ever of Martian organic compounds compiled 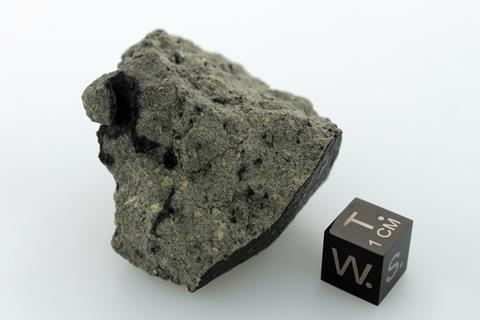 An international team of researchers has found that Martian meteorite Tissint, which landed in Morocco in July 2011, contains a ‘large diversity’ of organic compounds commonly associated with life. The scientists have assembled the most comprehensive catalogue to date of the various organic compounds found in the five Martian meteorites that have been recovered on Earth since 1815, or in any sample retrieved by a Mars rover.

One of the biggest surprises was the discovery that the Tissint contained an abundance of organic magnesium compounds, which had never been seen before on Mars. These organic molecules provide new insights about the high-pressure, high-temperature geochemistry that shaped the deep interior of Mars and the researchers point to a connection between the planet’s carbon cycle and its mineral evolution.

Greater understanding of the genesis of such organic compounds on Mars can help shed light on whether the planet ever hosted life, and it can also illuminate the geological history of Earth, explained the team that comprised scientists from several institutions including the Technical University of Munich in Germany and the Carnegie Institution for Science in Washington DC.

‘Understanding the processes and sequence of events that shaped this rich organic bounty will reveal new details about Mars’ habitability and potentially about the reactions that could lead to the formation of life,’ said study co-author Andrew Steele from Carnegie, who has studied organic material in Martian meteorites and served on the science teams of the Perseverance and Curiosity rovers.

It is noteworthy that previous Martian meteorite research, including work by Steele, has demonstrated that a range of organic molecules can be created by abiotic organic chemistry.