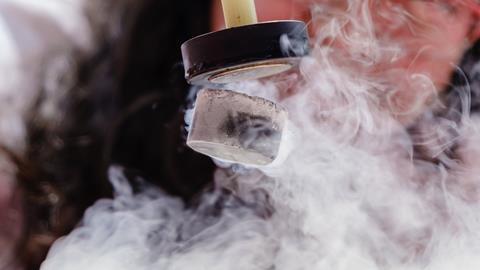 The race is on to make the first room temperature superconductor

In August and September this year two papers appeared on the arXiv preprint server that brought scientists closer to a discovery craved for many decades: room temperature superconductivity. Different international teams published preliminary measurements of yttrium superhydrides, which only form at very high pressures. This time, they could not produce YH10, which researchers have predicted to be superconducting at temperatures below 326K, or 53°C. But the fact that such predictions are guiding experimentalists shows that superconductivity science is reaching new levels. These calculations are now leading scientists to exciting new frontiers, where tough questions await them.

Artem Oganov from the Skolkovo Institute of Science and Technology in Moscow, Russia, calls the prediction that YH10 is a room temperature superconductor ‘really exciting’. ‘This is what we really want to synthesise, but these experiments are tough,’ he says. ‘We tried many times, we found a way to produce YH6. But YH10 will be the next step.’ Oganov and his colleagues found that the critical temperature (Tc) below which YH6 became superconducting was 224K at 166GPa, around 1.6 million times atmospheric pressure.1

I personally have no doubt that YH10 will be made, probably very soon

This September, eight weeks after Oganov’s team uploaded their paper to arXiv, another team reported a Tc for YH6 of 227K at 237GPa.2 Mikhail Eremets at the Max Planck Institute for Chemistry in Mainz and colleagues also made YH9, with a highest Tc of 243K at 201GPa. ‘The story with yttrium hydride is not finished yet,’ Eremets stresses. ‘I personally have no doubt that YH10 will be made, probably very soon,’ Oganov agrees, ‘either by us, or Eremets or by someone else.’

The highest Tc record so far is held by LaH10. This was first reported in early 2018 at up to 260K at 180GPa by a team led by Russell Hemley, now at the University of Illinois at Chicago, US. A few months later Eremets and colleagues similarly reported a 250K Tc at these pressures. 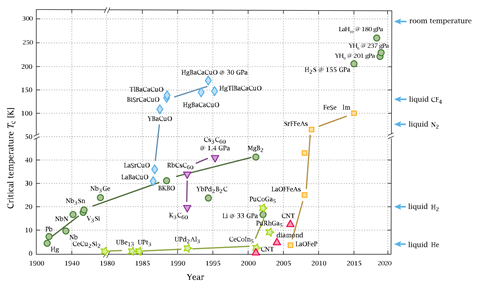 The development of superconducting hydrides has been a revelation for researchers looking to break the psychological barrier of room temperature superconductivity. Bardeen, Cooper and Schrieffer superconductors are represented by green circles, heavy-fermion ones by green stars, carbon allotropes by red triangles, buckminsterfullerenes by purple triangles, iron–pnictogens by orange squares and cuprates by blue diamonds

Hemley stresses that his team pursued LaH10 having predicted lanthanum and yttrium hydrides’ existence a year earlier.3 Those predictions also involved the theoretical chemistry expertise of Roald Hoffmann and Neil Ashcroft from Cornell University, US. Nobel prize winner Hoffman highlights Ashcroft’s suggestion that at high enough pressures hydrogen would become a superconducting metal as a key idea for the field. ‘The more specific suggestion to look in hydrides for ways to lower the pressure at which superconductivity would be accessible stimulated this entire field,’ he tells Chemistry World.

After theoretical studies exploring this idea, in 2014, Eremets and co-workers trounced the Tc record then held by cuprate superconductors, by taking humble hydrogen sulfide to high pressures. Above 150GPa, the team measured a Tc of 190K, compared to 164K for the best high pressure cuprate at the time.

The chemical arena where this progress happened sits between the micrometre-size tips of pairs of diamonds. In diamond anvil cells (DAC), tightening screws brings the tips of the diamonds together and allows scientists to record incredible pressures. These exceptional conditions can bring their own problems, as laser heating of samples in this tiny space can shatter the diamonds. Eremets notes that pulsing the laser beam can overcome this issue. ‘Amazingly, the sample can be heated up to around 2000K at pressures around 200GPa and the diamond anvils survive,’ he says.

Another key experimental challenge for producing superhydrides is providing enough hydrogen to form them. Eremets’ team clamps DACs together with hydrogen inside them, allowing them to controllably produce the highest hydrogen content substances, he says. Maddury Somayazulu, now at Argonne National Laboratory in Chicago, US, developed a method using ammonia–borane to release hydrogen when heated at high pressures. That approach helped Hemley’s team produce LaH10. ‘This greatly simplifies the experiment,’ Eremets observes.

Now you can predict the compound, and the predicted critical temperature is within 10% of the experiment

Such explosive-sounding setups are igniting superconductivity research in part because superhydrides conform with Bardeen, Cooper and Schrieffer (BCS) theory. In this framework, resistance originates when electrons travelling through a material bounce off the vibrating nuclei of its atoms. Below a ‘conventional’ superconductor’s Tc, electrons scatter less because they pair up. One electron is attracted to a positively charged nucleus, which distorts the superconductor’s structure by attracting the surrounding nuclei. This initiates a vibration, or phonon, within the material. That in turn creates an area of relative positive charge that attracts a second electron, forming a ‘Cooper pair’. This gives the material its superconducting properties. 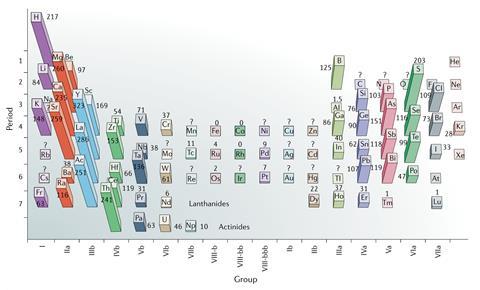 Compilation of the computed values of superconducting critical temperature of hydride superconductors, showing two pronounced belts of high-Tc superconductor-forming metals. There is no data for elements with a question mark

An exciting new development is that density functional theory (DFT) can now be used to approximate the energy levels of electrons and phonons, and their interactions. ‘Now you can predict the compound, and the [predicted] critical temperature is within 10% of the experiment,’ says Lilia Boeri at Sapienza University of Rome, Italy. ‘Five years ago, nobody would have believed that. Now it’s really at a stage, where you say to an experimentalist, this is interesting. In one year, they can synthesise your compound, even though it’s something that’s very hard to do. It’s a great achievement.’

Yet the calculations are not perfect. There is a discrepancy between Tc predictions for the yttrium superhydrides and the experimental results that may slightly dampen hopes of a room temperature superconductor in YH10. In 2015, Yanming Ma from Jilin University, China, and colleagues predicted that YH6’s Tc would be 251–264K at 120GPa3 – higher than experiments later revealed. This year, Boeri’s team predicted a higher figure still, 290K at 300GPa, which would make YH6 a room temperature superconductor.4 Boeri explains that inaccuracies in the Tc calculations can arise because with light nuclei like hydrogen the Born–Oppenheimer approximation used in quantum mechanical calculations like DFT breaks down. Researchers are now developing approximations to overcome this problem, but she warns that they are computationally costly. 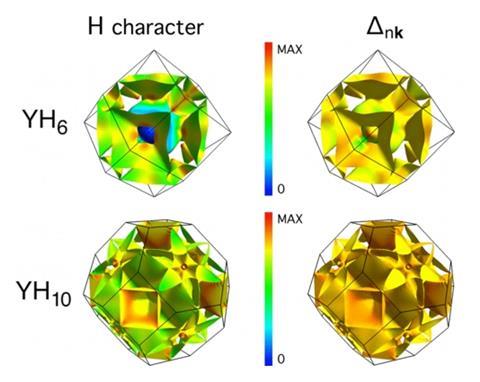 Hoffmann is ‘not in the least’ bothered by the YH6 discrepancy. ‘It’s not a big issue,’ he says. However he sees a deeper problem in that researchers in the field ‘don’t know why the calculations come out as they do’. ‘Ask them what chemical property, what stoichiometry, will lead to a large phonon–electron coupling, and they can’t do it,’ he says.

Hemley notes that practical studies also have shortcomings. ‘Structures are not fully determined experimentally,’ he says. He explains that in many cases the observed phases are identified from a few x-ray diffraction peaks from the materials’ heavy atoms that agree with theory. For all these materials at these pressures, structure assignments are made without information on the hydrogen atoms’ positions. Further, he would like to see ‘complete in situ synthesis and characterisation’ spanning electrical, magnetic and structural properties as a material passes into the superconducting state.

One pathway towards better knowledge has opened up because scientists have now ‘basically exhausted the entire chemical stage of binary superhydrides’ made of just hydrogen and one other element, Oganov asserts. ‘We and other groups have studied all of them,’ he says. ‘The next step will be to extend crystal structure prediction studies to ternary superhydrides.’

This provides the opportunity to follow up clues from previous results, where elements from groups 2 and 3 of the periodic table have been most successful, Oganov says. ‘If you want my opinion, these elements correspond to places where the energy of s, p, and d orbitals is similar. Occupancies of these orbitals will be sensitive to the atomic environment, which creates a very significant addition to the electron–phonon coupling strength in those materials.’ He notes that there are potentially a quarter of a million ways to combine three elements into ternary systems, and over 7000 ternary hydrides. Knowing the important elements ‘gives you a very powerful weapon with which you can select which systems to study’, says Oganov.

In August, Ma and colleagues published a study that showed the promise of ternary superhydrides. They predicted that Li2MgH16 would have a Tc of 473K at 250GPa, far in excess of room temperature.5 Yet, perhaps surprisingly, Ma wants to move beyond superhydrides. ‘I cannot see a future for the stabilisation of highly hydrogen rich compounds at ambient pressure,’ he tells Chemistry World. ‘Maybe we can find other candidates – carbon, boron, silicon or nitrogen for the light mass elements. Once we have the example at higher pressure, then we can apply all the rules to the design of superconductors at ambient pressure.’

Hemley calls the Li2MgH16 study ‘an exciting and important prediction’ and says that the results ‘should be taken seriously’. However, he notes that it’s metastable, meaning that it only has a small chance of being made. Hemley also says that the elements’ low atomic numbers could again mean quantum mechanical effects lower the measured Tc compared with the calculations.

‘On the other hand, these new results show that there is a rich chemistry that is yet to be explored beyond binary hydrides at these kinds of pressures,’ Hemley adds. ‘We need to examine ternaries and even more complex chemical systems in the search for new materials with even higher Tc – and perhaps enhanced kinetic stability – as well as possibly new physics such as superconducting superfluidity.’

High pressure superconductivity was marred by rancorous disputes early on over the hydrogen sulfide findings, but these seem to have passed now. The field is now progressing quickly because researchers are disclosing their procedures, says Hemley.

Boeri says that the race is on to produce a room temperature superconductor and the winner ‘probably will get the Nobel prize’. ‘But compared to other types of superconductors that I worked on I think the competition is still pretty mild,’ she says.

The extremely high pressures involved and small amounts of material produced might make the field seem obscure, but Boeri stresses there is real practical importance. ‘The goal, of course, is to have new materials at ambient pressure, maybe not room temperature superconductors, but high temperature superconductors for sure,’ she says. ‘The tools and the knowledge developing in this field will probably lead there.’