Humble hydrogen sulfide may be the best superconductor produced yet, but only under extreme pressures 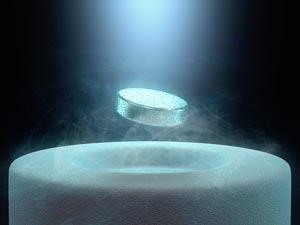 Hydrogen-rich compounds under extreme pressure may be better superconductors than the best conventional ones around, according to scientists in Germany. The results suggest metallic hydrogen-based compounds may offer up to 50 times less electrical resistivity than copper and conduct at -83°C, the highest recorded temperature for a hydrogen-rich superconductor. The best superconductors in existence today stop working at -109°C.

The work conducted by Mikhail Eremets and his colleagues at the Max Planck Institute for Chemistry, Germany, is rooted in a theory proposed by Eugene Wigner and Hillard Bell Huntington back in 1935. The physicists predicted pure hydrogen becomes metallic at very high pressures – approximately 25GPa.

Theory predicts such a phase would conduct at ‘room temperature or even higher’, according to Isaac Silvera, from the University of Harvard, US, who was not involved in the work. One of the reasons for this is the hydrogen lattices’ ability to vibrate and force electrons into pairs. These Cooper pairs flow freely through the metallic hydrogen without any resistance.

But obtaining the sought-after metal has proven ‘very difficult’ in the past few decades, Silvera goes on to explain. To be any use for real world applications the metallic hydrogen needs to be metastable and remain in this metallic state at everyday pressure, something which has never been achieved.

‘If we can’t get pure metallic hydrogen or if that’s more challenging, what about looking at [hydrogen-rich] compounds,’ says Silvera. That is exactly what Eremets and his colleagues set out to do.

The team in Germany placed hydrogen sulfide (H2S), a toxic gas that smells like rotten eggs, into a diamond anvil cell (DAC). Placed between the flattened tips of two diamonds in a metal tube, the gas is condensed under low temperatures to produce liquid H2S. When the H2S is subjected to tremendous pressures in the DAC it develops a metallic character. Using this DAC the team were able to produce pressures comparable to those at the centre of planets – up to 150GPa.

Eremets and his colleagues found that the resulting metallic compound superconducted at 190K (-83°C) at pressures of 150GPa. Although the team know H2S superconducts, it still remains unclear why. The team say H2S may dissociate and form a hydride, which may be a likely cause of the high superconductivity.