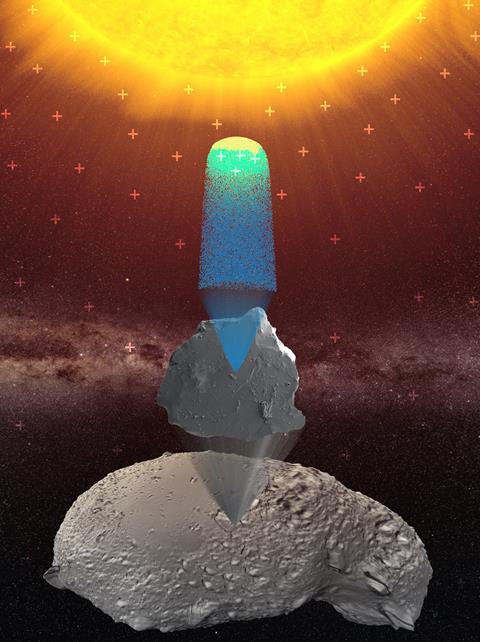 Where the Earth’s oceans that cover 70% of its surface came from remains a mystery, but now a team of international scientists has determined that the sun is likely a significant source of that water. Using atom probe tomography to analyse an ancient asteroid, they found that solar wind – the stream of mostly hydrogen and helium ions that flow from the sun – probably created water on the surface of dust grains brought to Earth on asteroids as the planet formed billions of years ago.

When hydrogen ions hit an airless surface like an asteroid or a spaceborne dust particle, they penetrate a few tens of nanometres below the surface and can affect the chemical composition of the rock. Over time, explained Luke Daly, a planetary scientist at the University of Glasgow and the paper’s lead author, this ‘space weathering’ effect can eject enough oxygen atoms from materials in the rock to create water.

This is one of the first studies to investigate space weathering using atom probe tomography, which enables precise 3D reconstructions of tiny samples. The researchers used the technique to image a thin hydrogen enriched layer at the atomic scale that they recovered just below the surface of the S-type asteroid Itokawa. Using the Geoscience Atom Probe Facility at Curtin University in Australia, they precisely measured the ratio of hydrogen to its heavier isotope deuterium, and deduced that the hydrogen and deuterium had been fixed into the mineral by solar wind.

Based on what the team found on dust grains on Itokawa, they estimate that every cubic metre of asteroid should hold 20 litres of water.

A paradigm shift in space

The current paradigm is that water was delivered to Earth from an extra-terrestrial source soon after it had formed. One good candidate is C-type asteroids – which are thought to be the parent bodies for carbonaceous chondrite meteorites and orbit farther from the sun than S-type asteroids – because they contain up to 10% by weight water. However, their isotopic ratio doesn’t match Earth’s water, explains study co-author Nick Timms, a geologist from Curtin University.

An additional isotopically-lighter source, with relatively more hydrogen, is needed to account for the isotopic signature of Earth’s water, he says, noting that the sun has the right deuterium/hydrogen composition but, until now, there was no delivery mechanism.

Beyond Earth, the researchers concluded that solar wind-irradiated silicate minerals may represent a substantial renewable source of water on airless worlds throughout the galaxy. ‘It is exciting to think that future missions to other worlds may be able to somehow extract life-giving water, or indeed hydrogen and oxygen for fuel, from water-rich dust on their surfaces,’ Timms tells Chemistry World.

Timms is eager to see what information future asteroid sample return missions can provide. He’s looking forward to analysing samples from the Japanese Aerospace Exploration Agency’s Hayabusa II mission, which visited asteroid Ryugu and dropped samples back on Earth about a year ago, and Nasa’s Osiris Rex mission, which is currently on its way back to Earth from the asteroid Bennu and is expected to return samples in 2023.

Laurette Piani, a cosmoschemist at the University of Lorraine in France who was not involved in the study but led research last year that showed most of Earth’s water could have come from enstatite chondrite meteorites, says the data behind the paper appears ‘very robust’. However, she suggests that one of the study’s limitations is that this implantation process could not take place in the very first millions of years of the solar system because it was initially formed mainly of gas, which would have protected the grains from significant solar irradiation.

This gas would not have dissipated until five to 10 million years after the solar system’s formation, and by then the main mass of the Earth was likely already accreted, according to Piani. Yet, on Earth the deuterium-poor signatures are observed in rocks derived from the deep mantle and not on the surface or oceans, she says.

‘Rather than explaining the origin of water on Earth, I feel that this work has better implications for understanding the weathering of dust in space in general,’ Piani states. She says this is key to understanding the initial nature of the pristine material in the solar system, and potentially for the search for water sources in planetary bodies for future space missions.