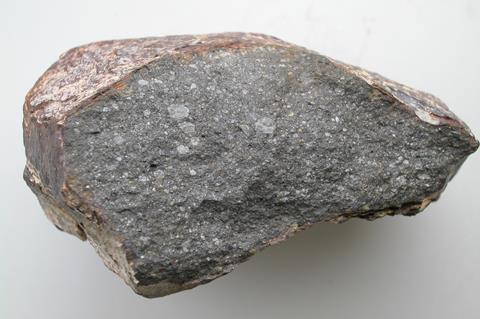 Piece of the meteorite Sahara 97096 (about 10cm long), an enstatite chondrite that contains about 0.5 weight % of water. If Earth formed entirely of this material, it would have received 23 times the total mass of water present in the Earth’s oceans

Meteorites of a type previously considered devoid of water contain enough hydrogen to have supplied three to five times the total mass of water in Earth’s oceans, according to researchers in France and the US.

The origin of Earth’s water is an open debate, but is generally attributed mainly to hydrated minerals in meteorites coming to Earth from the outer solar system, such as carbonaceous chondrites. Matter from the inner solar system is deemed too warm to have retained water ice.

Laurette Piani and her team at the University of Lorraine and Washington University of St Louis analysed 13 enstatite chondrites. These meteorites represent material from the inner solar system, but previous attempts to measure their hydrogen concentrations (and hence ability to form water) and isotopic ratios (to compare terrestrial water) have hit difficulties. The team employed elemental analysers coupled to stable isotope ratio mass spectrometers to measure bulk samples, and secondary ion mass spectrometry to measure at micro scale. Combining isotopic measurements across a variety of elements with computer models of Earth’s formation suggests that enstatite chondrites likely contributed significantly to the water content of Earth’s surface and mantle.