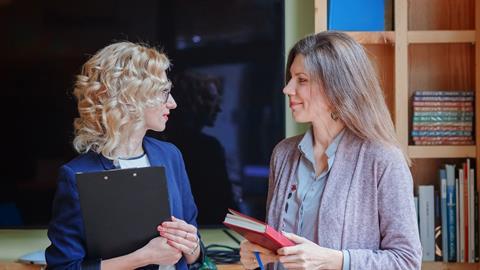 Chemistry students who have an adviser of the same gender publish more papers and are more likely to become researchers themselves, a study of 20,000 US graduates has revealed. This effect is particularly strong in women, who are 50% more likely to become professors if they have been supervised by a woman during their PhD.

Although around 50% of science and engineering graduates in the US – and 41% of UK physical sciences graduates – are women, this does not translate to equal representation of men and women in higher research positions, a phenomenon known as the leaky pipeline. A consequence of this leaky pipeline is that only 20% of US science professors are female. Researchers are starting to uncover why women leave science as their careers progress, exploring various reasons such as parental pressure.

Patrick Gaulé from the University of Bath, UK, and Mario Piacentini from the Organisation for Economic Co-operation and Development have found another possible reason: female chemistry PhD students are more productive and 50% more likely to become academics if they have been supervised by a woman. But since there are fewer female advisers, women are statistically less likely to have a supervisor of the same gender. For men, their adviser’s gender doesn’t seem to influence their likelihood of becoming an academic, though male PhD students with female advisers publish fewer papers.

Gaulé and Piacentini discovered this correlation after reviewing data from 20,000 students and their advisers at research-intensive US universities over 10 years. They rated research productivity by counting the number of publications a student produced during their PhD, accounting for the papers’ impact.

However, ‘we don’t necessarily find a causal effect because […] the allocation of students to supervisors isn’t random,’ Gaulé explains. Another explanation, he says, could be that more academically oriented women may prefer to work with female advisers. ‘In my view, the results point towards the potential importance of having female role models for female individuals to get engaged in academic research,’ says economics researcher Natalia Zinovyeva from Aalto University in Finland, who recently reported that assessor gender influences tenure committee decisions.

However, Zinovyeva points out that the study ‘is very suggestive, but descriptive in nature’. ‘It also has a limitation of being based on a sample of graduates […] so it cannot say anything about the impact of the advisers’ gender on the likelihood to graduate.’

The findings also stand in contrast to earlier studies looking at economics PhDs, which didn’t find a correlation between gender adviser and a students’ likelihood of becoming a professor. The reason for this, Gaulé speculates, might be that ‘in chemistry, there is quite a lot of interaction between student and adviser’. ‘I think we would get similar results in physics,’ he adds.

Nevertheless, ‘we conclude that this is one more reason to hire women in faculty positions because that will help the female students in the department and increase their retention rate in academia’, says Gaulé. Zinovyeva adds: ‘Offering solutions to these problems is tricky, but perhaps awareness of the problem is the first necessary step.’