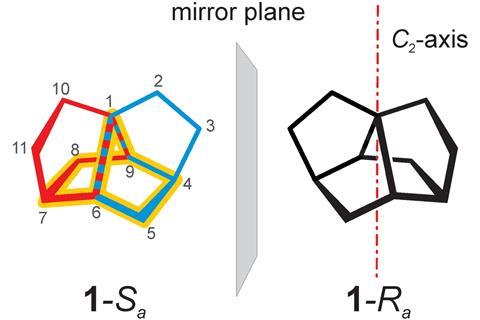 Scientists have successfully synthesised one of last small polycyclic hydrocarbons left to make or find in nature.1

Until recently, trinorborane (tetracyclo[5.2.2.01,6.04,9]undecane) had only existed in the Chemical Universe Database (GDB) – a database containing all possible molecules up to a certain number of atoms.2 Trinorbornane has an interesting structure where two norbornanes share a pair of neighbouring edges so it looks like three interlaced norbornanes.

Marcel Mayor from the University of Basel and colleagues found this 11 carbon synthetic target in the GDB and became fascinated with its C2 symmetrical beauty. They challenged themselves to synthesise this structure with axial chirality and have now successfully made both structures in a racemic mixture.

Mayor’s team made trinorbornane in nine steps and achieved a yield of 9%. An important step in synthesising this structure was introducing a quaternary carbon atom early on to produce a precursor with the first five membered ring and all 11 carbons of the final structure.

Mayor and his team used 1H and 13C-NMR to confirm the compound’s structure. They now hope to synthesise enantiomerically pure samples.