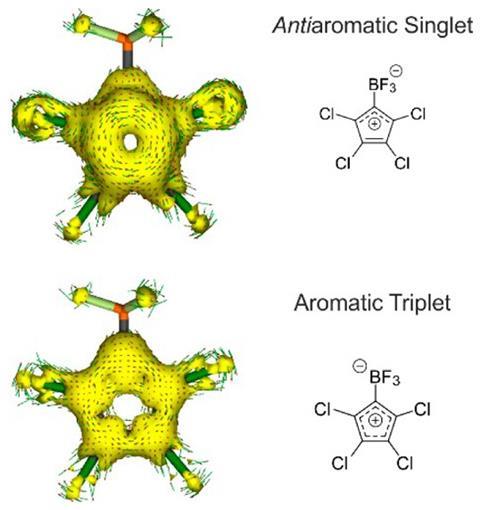 The cyclopentadienyl zwitterion may be the smallest true antiaromatic molecule

Aromatic molecules with 4n+2 π electrons are more stable than their non-aromatic counterparts. But antiaromatics have only 4n π electrons and are particularly unstable, so much so that the three smallest possible textbook examples – the cyclopropenyl anion, cyclobutadiene and the cyclopentadienyl cation – are all suspected of not being truly antiaromatic.

The cyclopropenyl anion is thought to be non-aromatic,2 and cyclobutadiene’s instability comes from its strained structure rather than from being antiaromatic.3 In 2007, researchers found that the cyclopentadienyl cation’s ground state is a triplet. According to Baird’s rule, only molecules with a singlet ground state are genuine antiaromatics.

Now, German researchers have made a tetrachlorocyclopentadienyl zwitterion (a neutral molecule carrying separate positive and negative charges) with a singlet ground state. The compound proved to be highly unstable, rearranging into a more stable molecule under the infrared light the team used to study it even at –248°C (25K) in solid argon.

Nevertheless, the team’s spectroscopic measurements show that the zwitterion is a real antiaromatic, making it the smallest of its kind. It might even become the new textbook example illustrating the nature of antiaromaticity.