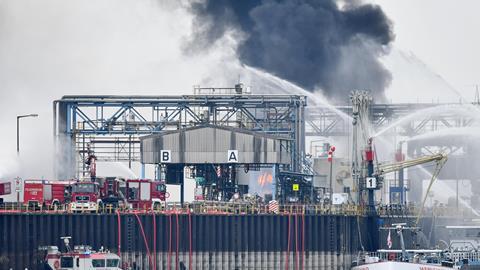 Crackers and related plants will restart over coming days

A third death has been confirmed at chemicals giant BASF’s site in Ludwigshafen, Germany, after an explosion and fire on 17 October.

The deceased joins two BASF firefighters who died in the incident. A further 25 people were injured, eight seriously. Several were treated in BASF’s onsite medical facilities, with some transferred to local hospitals.

With the site’s north harbour and associated pipelines out of action, BASF has reconfigured its site logistics and supply lines to allow its two steam crackers and dependant plants – which had been shut down or running at reduced capacity – to restart.

On the same day as the Ludwigshafen incident, there was an unrelated fire at the company’s nearby site in Lampertheim. A ‘deflagration’ at a filter in a plastic additives plant injured four workers, two of whom were hospitalised while the others returned to work the same day.

Investigations into the causes of both incidents are ongoing.