To lecture or not to lecture? 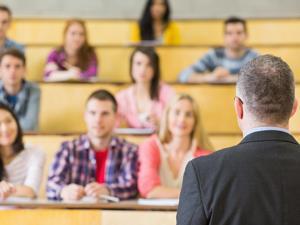 New research showing that US undergraduate students enrolled in science, technology, engineering, and mathematics (STEM) courses featuring traditional lecturing are one-and-a-half times more likely to fail than are students in classes with so-called ‘active learning’, is getting a mixed response from academia.

University of Washington biologist Scott Freeman and colleagues found that average failure rates were 21.8% when student were taught using active learning but 33.8% under traditional lecturing. In addition, the researchers concluded that average examination scores improved by about 6% in active learning sections, which involve student participation in discussions and problem-solving, as opposed to lectures where the student is a passive participant in the learning process.

Meta analysis of 225 studies, many of which were funded by the National Science Foundation (NSF), reported data on examination scores or failure rates in undergraduate STEM classes. The NSF called Freeman’s work the ‘most comprehensive analysis ever published’ of lecturing versus active learning in undergraduate STEM education. It added that the results raise questions about the use of traditional lecturing and threw its support behind active learning as the ‘preferred, empirically validated’ teaching approach.

Eric Mazur, a physics professor and Dean of Applied Physics at Harvard University, US, concurs. ‘The evidence is irrefutable and it becomes simply unethical to continue to lecture exclusively,’ he tells Chemistry World. ‘The lecture still has a role, as a vehicle for motivation, but as the exclusive approach to teaching, it does more damage than good.’

Jim Donovan, a professor of natural sciences at Shimer College, US, suggests that ‘you can’t teach chemistry well, even the atomic model, simply by talking’. He urges chemistry professors to get undergraduate students solving the problems and addressing the information in class, instead of just lecturing at them and then having them engage with the material by themselves later.

Meanwhile, others in academia caution that Freeman’s findings, if misapplied, could undermine US STEM education. ‘A lecture is an effective way to ensure that young people understand what the discipline is really all about, and what the standards are,’ says Frank Furedi, a sociology professor at the University of Kent, UK. ‘They provide historical and intellectual context.’ Freeman and his colleagues are interested in ‘the politics of inclusion’ and are advocating active learning strategies to ensure that disadvantaged and underrepresented minorities stay in STEM education, Furedi says. ‘There is a social engineering impulse of these researchers,’ he claims. ‘This says to have more students trained in STEM disciplines, you have to lower the bar and intellectual challenge.’