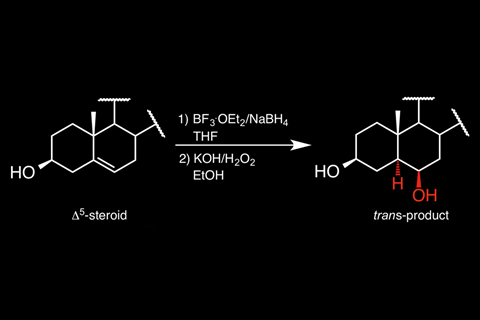 The reaction violates, in principle, all hydroboration mechanisms reported to date 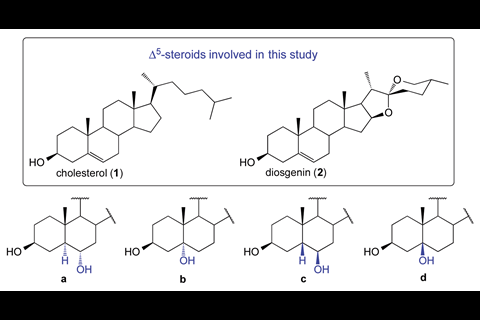 In general, most hydroboration–oxidation studies on Δ5-steroids generate only one alcohol with the stereochemistry of 1a

Chemists have shown they can generate unusual trans-isomers from the hydroboration of two steroid compounds, in addition to the expected cis-isomers.

Hydroboration is a well-known organic reaction that converts unsaturated compounds into highly versatile organoboranes. Ordinarily, the reaction produces an anti-Markovnikov product (where the hydrogen adds to the more substituted carbon of the double bond), and the H and BH2 substituents are added to the same, less hindered π-face of the double bond, giving a cis-isomer. Oxidation using hydrogen peroxide frequently follows hydroboration, to give the corresponding alcohol.

Here, despite using typical experimental conditions for the hydroboration–oxidation of two steroid compounds, the team led by Gabriel Merino and María Fernández-Herrera from the Centre for Research and Advanced Studies (Cinvestav) in Mexico obtained trans-alcohol products in yields of 21–38%. To understand these surprising experimental results, they performed quantum chemical calculations. From these calculations, the team hypothesised a retro-hydroboration of the major product – the initial hydroboration step reverses, regenerating a double bond adjacent to the original position. Hydroboration of this bond then occurs preferentially on the opposite face to usual, resulting in the trans-isomer.

The team chose the steroids cholesterol and diosgenin as substrates since they are rigid and have different structural environments around the double bond – this allowed them to trap the trans-isomer. Although the cis-isomer is still the major product, these results demonstrate the first exception to the typical hydroboration mechanism.