Chemists have discovered the first small molecule with a type of isomerism thought to only exist in macromolecules like rotaxanes.1 The finding came about by chance when the researchers realised that the characterisation data of a natural product they had synthesised didn’t match the real thing: they had made the wrong, inside-out isomer. The team behind the work thinks there could be many more cases like this that have gone undiscovered.

The natural product the team led by Phil Baran at the Scripps Research Institute in the US was trying to make was tryptorubin A. This alkaloid was isolated from bacteria that live in symbiosis with fungus-farming ants. Jon Clardy and colleagues at Harvard University, US, published its structure in 2017.2

An 11-step synthesis the Baran group devised over nine months seemed to produce tryptorubin. But while the molecule had the right chemical formula, its nuclear magnetic resonance (NMR) and liquid chromatography data didn’t match that reported by Clardy.

Initially, the researchers thought it would be a simple case of an inverted stereocentre. But after two weeks of deciphering spectral data, they came to a much more surprising conclusion: both tryptorubin versions have the same configuration at each of their chiral carbon atoms, but one molecule is inside out relative to the other.

‘When [Reisberg] first contacted me about the NMR differences, I thought there was a reasonable chance that we might have just been wrong in a much more fundamental way than a single stereocentre,’ Clardy admits. But he says it never crossed his mind that there might be another, inside-out isomer. ‘It’s a new form of isomerism in a small molecule context,’ says the study’s first author Solomon Reisberg. Like in rotaxanes and lasso peptides – a tail threaded through an attached macrocycle – tryptorubin’s chirality is based on its 3D shape. The team classes all of these as non-canonical atropisomers. 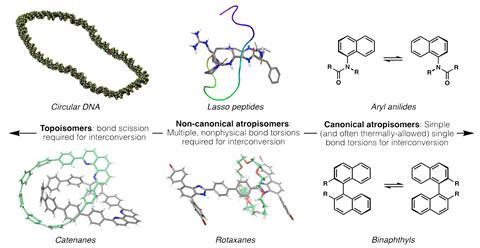 In traditional atropisomers, like the binaphthyl Binap, hindered rotation around a single bond is what gives them a chiral axis. But simply calling tryptorubin an atropisomer seems to misrepresent its complex chirality, says Baran, hence the term ‘non-canonical’.

Other chemists remain unsure how to define tryptorubin’s chirality. ‘The atropisomerism is unique and is reminiscent of supramolecular stereoisomerism,’ says Jayaraman Sivaguru, supramolecular chemist at Bowling Green State University in the US. Agnieszka Szumna, who researches inherent chirality at the Polish Academy of Sciences, says she ‘would not even dare to compare it to rotaxanes’. ‘I would say that this type of isomer is not similar to anything else that was previously reported.’

‘Tryptorubin A exhibits several instances of atropisomerism at different locations in the molecule with these unable to thermally interconvert without bond breaking and reformation,’ says Jeffrey Reimers from the University of Technology Sydney, Australia, and Shanghai University in China. In 2018, his team coined the term akamptisomerism for the first new type of isomerism discovered in 50 years.3 But tryptorubin isn’t an akamptisomer, Reimers explains, because its hindered torsions don’t involve a common atom.

After coming up with their ‘inside-out’ hypothesis, the team spent almost another year making the natural isomer. In this first of its kind synthesis, a stereocentre formed in an earlier reaction transfers its point chirality to the molecule’s 3D shape in the crucial ring closure step. ‘It’s an impressive synthesis and the stereochemical issues raised exemplify something that is becoming increasingly encountered as research turns towards these increasingly complex polymacrocyclic biomolecules,’ says Reimers.

Reisberg is certain that there are more molecules with this unusual type of chirality, but it’s very likely they’ve been missed. ‘If you make the correct one first, by accident, you’ll never know that this type of isomerism exists,’ he points out.

‘The most important thing is that the authors show us how we should look at certain structures,’ says Szumna. ‘We can all notice this if we want to and if we are aware of what we are looking for.’