US-based scientists have come up with a sustainable way to harvest hydrogen fuel from biomass. Their new electrolytic approach can even release hydrogen from obstinate molecules like lignin and cellulose. 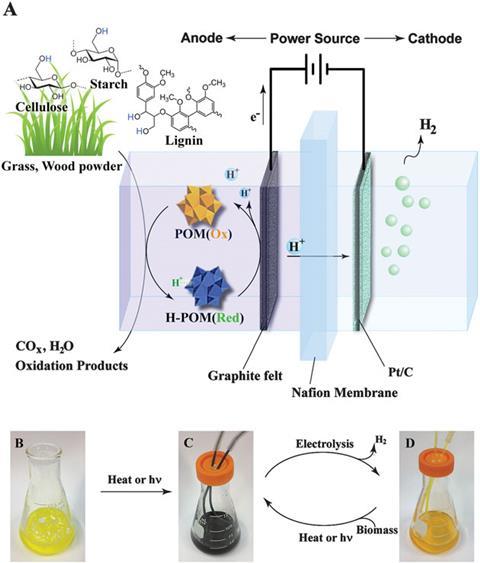 In this chemical-electric conversion, a polyoxometalate (POM) catalyst oxidises the biomass and then liberates hydrogen during

Although hydrogen is the most abundant element in the universe, it’s so light that Earth’s gravity cannot hold onto it. This is unfortunate, as molecular hydrogen also happens to be the cleanest fuel – burning in air to give just water and energy. Because only trace amounts exist in the atmosphere, most hydrogen fuel today is derived from fossil fuels, using processes called petroleum reforming and coal gasification. It can also be thermochemically extracted from biomass, using high temperatures and expensive catalysts. Other ways to harvest hydrogen from biomass are fermentation, electrolysis and photoelectrochemical conversion, but these methods cannot directly break down the fibrous lignin and cellulose found in wood and grass.

Now, Yulin Deng and his team at Georgia Tech have developed a low-temperature electrolytic technology that can harvest hydrogen fuel from nearly all types of biomass.

The process takes place in an electrolysis cell containing a membrane that protons can pass through, sandwiched between an anode and a cathode. Water containing both powdered biomass and polyoxometalate (POM), a metal oxide catalyst, is added to the anode side of the cell. By heating the solution or exposing it to sunlight, POM molecules can grab hydrogen atoms from the biomass, becoming H-POM. Applying a voltage across the electrodes causes the H-POM molecules to dump an electron onto the positively charged anode, and a proton into the electrolyte solution. The electrons flow around a circuit to the cathode side of the cell, while the free floating protons diffuse though the membrane and combine with these electrons at the cathode, forming hydrogen atoms. The atoms then react to form stable hydrogen gas, which can be collected.

Experts in deriving hydrogen from biomass have praised the new approach. ‘This process provides an open door to using smaller quantities of biomass and different biomass varieties for renewable hydrogen production,’ comments Chris Zygarlicke, at the University of North Dakota, US. And David King from the Pacific Northwest National Laboratory, US, says, ‘this is really interesting work … the claimed Faradaic efficiency for the process is extremely high.’

Deng and his team are currently working to make the method even more efficient. ‘Our goal is to collect 100% of the hydrogen atoms from biomass. We’re also looking for an industrial collaborator to scale up the technique.’