Trinuclear complex is a rare example of bottled double aromaticity

Scientists have made a heteronuclear complex containing a ruthenium atom that takes part in two different aromatic systems. This exotic molecule is surprisingly stable. In fact, it’s so stable that it can be bottled and stored.

Aromaticity is a phenomenon where electrons are shared across multiple atoms within a molecule. August Kekulé proposed the structure of the earliest and most famous aromatic molecule, benzene, in 1865. Benzene contains π-aromaticity, where a series of overlapping p-orbitals can share electron density. Since then, chemists have found and made countless structures to test and explore the boundaries of aromaticity in its various different guises.

The latest instalment in the storied tale of aromaticity comes from a team led by Alexander Boldyrev of Utah State University in the US. Working with colleagues in Chile and Italy, his team has created the second doubly aromatic molecule that is also considered stable. It takes the form of a heterobimetallic [Pd2Ru]+ cation, whose metal centres are decorated with phosphines, thiols and a para-cymene ligand. Other researchers have made similar trimetallic cores before, but this is the first to contain two different metals that are not adjacent on the periodic table. 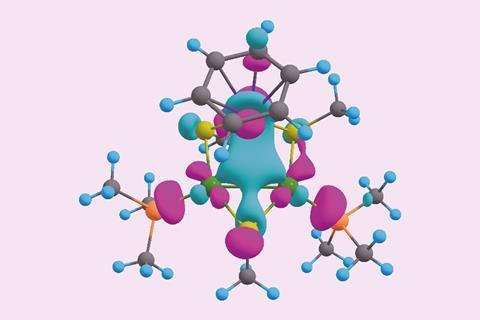 Note the very unusual topology of the highest occupied molecular orbital: it is constructed by mixing different types of d-orbitals

Computational studies, and the surprisingly short metal–metal bond lengths, indicate that the all-metal triangular core has two electrons delocalised over the three metal centres in a σ-aromatic network. The para-cymene ligand is a common π-aromatic ligand. Calculations by the researchers revealed that the ruthenium atom of the metal core actually gets involved in the aromaticity, resulting in a π-aromatic system with two electrons delocalised over seven different atoms.

The complex is the first example of ruthenium simultaneously taking part in two types of aromaticity – a concept called spiroaromaticity. The researchers note, however, that as ruthenium is not in the plane of the all-carbon π-aromatic ring, a new term may be necessary.