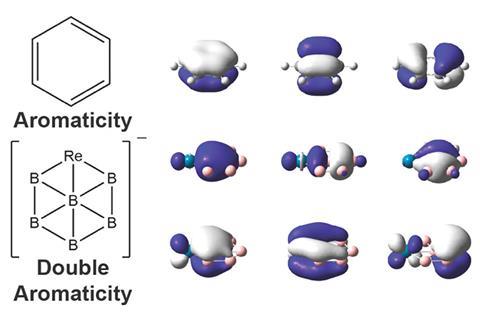 The boron-based metallabenzene analogue is doubly aromatic but highly unstable

Six boron atoms and one rhenium make up the first boron analogue of a metallabenzene. The hexagonal cluster is one of the few double aromatic molecules, featuring both σ and π aromaticity.

In benzene, a typical π-aromatic molecule, overlapping π orbitals between neighbouring carbon atoms allow electrons to freely flow around the ring. However, overlapping σ orbitals can also house delocalised electrons, making a compound σ-aromatic. Only last year, researchers discovered the hexakis(phenylselenyl)benzene dication, the first molecule that is both σ- and π-aromatic.

Now, Lai-Sheng Wang’s team from Brown University, US, has stumbled upon another double aromatic compound, a hexaboron rhenium anion ReB6–. The molecule contains a ring made of five boron atoms and one rhenium atom, with another boron sitting in the middle of the ring. It is the first boron analogue of a metallabenzene, a benzene ring in which one carbon – or in this case boron – is replaced with a metal atom.

The compound is highly unstable, and only exists long enough for mass spectrometry and photoelectron analysis. The researchers made it by focusing a laser onto a powdered boron–rhenium mixture, and trapping the resulting fragments in helium. However, Wang’s team thinks there might be more stable boron metallabenzenes that could be synthesised in bulk. Some larger clusters may even display Möbius aromaticity.