Warped nanographene at odds with aromaticity

A computational study investigating aromaticity in nanographene (C80H30) has determined the most efficient circuits for π electron delocalisation. The favoured routes contain 50 and 75 π electrons, with the first following Hückel’s rule and the latter not obeying any of the known requirements for aromaticity.1 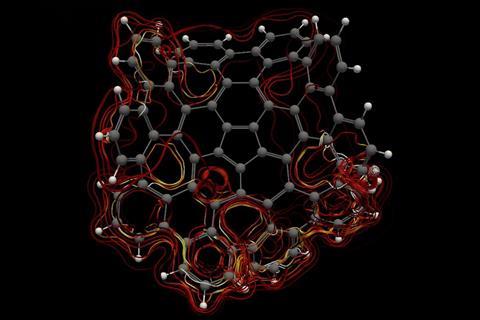 Aromaticity is widely known in organic chemistry for exploring the electronic characteristics of molecules, and is typically associated with Hückel’s rule. According to this rule, if a molecule is cyclic, conjugated, planar and has 4n+2 π electrons, it must be aromatic. Yet the concept of aromaticity is hard to describe. ‘Some people say that aromaticity is like beauty, people know if something is beautiful or not, but you cannot define it,’ says Miquel Solà, from the University of Girona in Spain.

Whilst Hückel’s rule can indicate aromatic behaviour in monocyclic systems like benzene, it is not applicable to polycyclic systems such as pyrene. As an extension to this rule, Clar’s sextet model provides information on the local and global aromaticity found in a molecule, indicating the most reactive regions. However, Solà explains ‘in some cases it is not clear which is the circuit that allows for better π electron delocalisation.’

This led Solà and his team to investigate how defects – in the form of five- and seven-membered rings – in nanographene affect the local and global aromaticity of circuits within the system. Key indicators to measure the extent of aromaticity are the aromatic fluctuation index (FLU), the harmonic oscillator model of aromaticity (HOMA), the electron density of delocalised bonds (EDDB) and the gauge including magnetically induced current (GIMIC) method. Using FLU, the closer the value is to 0, the greater the level of aromaticity in the circuit. For HOMA, the closer the value is to 1, the higher the aromaticity. In terms of EDDB, aromaticity is measured according to the electrons delocalised between conjugated bonds2 and GIMIC is used to determine the presence of ring currents in a molecule, a key feature of aromaticity.3 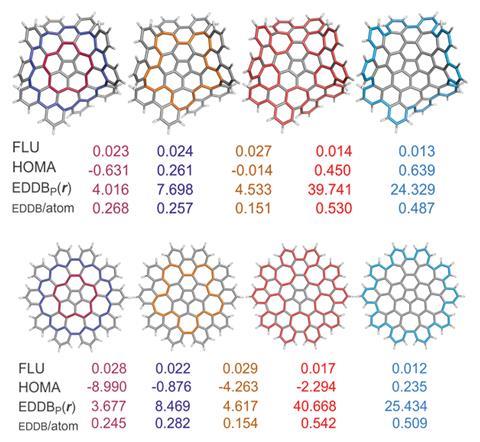 Both planar and non-planar nanographene show this trend, demonstrating for the first time that extended aromatic circuits are possible in non-planar structures that possess an odd number of electrons. Harry Anderson, who investigates aromaticity in π-conjugated systems at the University of Oxford in the UK, comments ‘it is surprising that one of these circuits has an odd number of electrons, and also that both circuits involve cross-conjugated pathways (ie they do not have alternating single and double bonds). This study will stimulate people to explore aromaticity in molecules with odd numbers of electrons.’

The GIMIC approach is often adopted to indicate aromaticity, leading Solà and his co-workers to conclude that the 75 π electron circuit is the most favourable circuit in the case of nanographene. This circuit is likely to possess mainly global aromaticity, but further work is needed to confirm this. The team also plan to build upon this work by analysing ‘other macrocyclic nanographenes containing defects … to see if this is something particular of this system or something that is more general [in macrocycles].’