A new study has shown that all-metal species can follow Baird’s rule and have aromatic excited states.

Hückel’s rule is one of the most widely known concepts in organic chemistry. It says that a cyclic molecule is aromatic if the ground singlet state has 4n+2 π-electrons and anti-aromatic if there are 4n π-electrons. Baird’s rule works in a very similar way, except it refers to the lowest lying triplet state of the molecule. The other key difference is that aromaticity in this case is reversed i.e. the molecule is aromatic if it has 4n electrons. This makes Baird’s rule useful in assessing the properties of excited molecules.

While aromaticity is traditionally thought of as the domain of the organic chemist, recent studies have shown that molecules consisting entirely of metal elements can also obey Hückel’s rule. Now, a collaboration between researchers in China, Spain and Poland, led by Jun Zhu of Xiamen University and Miquel Solà of the University of Girona has shown that Baird’s rule can also extend to all-metal systems. 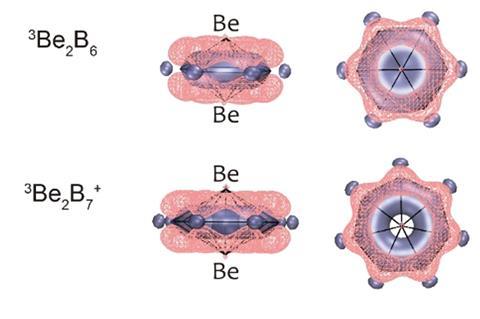 Using density functional theory calculations, the researchers were able to show that a series of lithium–aluminium clusters obey Baird’s rule. They began by comparing the delocalised electron density of the metal clusters with that of cyclobutadiene, a well known organic molecule that obeys Baird’s rule. Further studies considering the geometry and symmetry of the clusters confirmed their aromatic character.