White House strategy to reduce pharmaceutical prices faces backlash from the industry, which cautions against the ‘far-reaching’ proposals 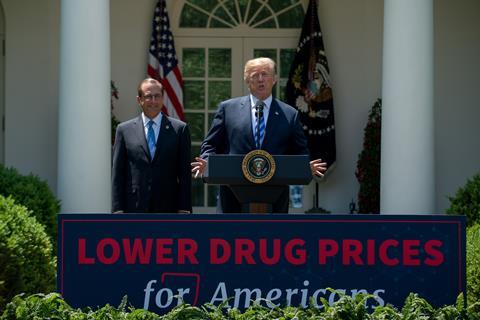 The US pharmaceutical industry has concerns about President Trump’s blueprint to address the high cost of medicines in America, unveiled in a speech in the White House’s iconic Rose Garden on 11 May. The administration’s new strategy explicitly targets ‘excessively high drug prices, foreign freeloading, and a system rigged to reward list price increases’.

The White House cited data from the Organisation for Economic Co-operation and Development that show the US had the highest per-capita pharmaceutical spending in 2015. Prescription drug spending increased 1.3% to $328.6 billion (£242.6 billion) in 2016, according to the US Centers for Medicare and Medicaid Services.

Lower-cost drugs cannot enter the US market because of efforts by pharmaceutical companies to game regulatory processes and the patent system so that they can maintain unfair monopolies, Trump complained.

‘We are going to take on one of the biggest obstacles to affordable medicine – the tangled web of special interest,’ he declared. ‘The drug lobby is making an absolute fortune at the expense of American consumers – no industry spends more money lobbying than the pharmaceutical health products industry.’

Last year, pharmaceutical companies spent nearly $280 million on lobbyists – which is more than tobacco, oil and defence contractors combined, according to Trump. He vowed that his administration will get tough on the drugmakers that exploit US patent laws to choke out competition. ‘Our patent system will reward innovation, but it will not be used as a shield to protect unfair monopolies,’ he asserted.

Some of these proposals could help make medicines more affordable for patients, others would limit patients’ access to innovative treatments

Beyond calling out abuses of the system that hamper drug price competition, the Trump administration also aims to strengthen and enhance the overall generic drug review process at the US Food and Drug Administration (FDA). The White House has committed to timelier generic drug reviews to reduce the cycles of review typically faced by generic applications.

The FDA approved more than 1,000 generic drug applications in 2017, which was a record number, according to the agency’s administrator, Scott Gottlieb. He said the FDA expects to beat that target this year.

Boost for biosimilar and over-the-counter drugs

The Trump administration also wants to boost pharmaceutical price competition by facilitating the timely development of biosimilars, and working to streamline and accelerate the approval process for over-the-counter drugs. In addition, the White House will evaluate the prospect of requiring drug makers to include prices in their ads, and it wants to give the Medicare Part D plan sponsors more negotiation power with drug companies.

‘While some of these proposals could help make medicines more affordable for patients, others would disrupt coverage and limit patients’ access to innovative treatments,’ Ubl stated. He said the proposed changes to Medicare Part D could undermine the programme’s existing structure that has managed to hold down costs and provided seniors with access to comprehensive prescription drug coverage.

In fact, Ubl said that medicine prices increased just 1.9% last year, below the rate of inflation, and yet patients’ out-of-pocket costs continue to skyrocket.

The White House’s new drug pricing blueprint will clearly have ramifications abroad. ‘When foreign governments extort unreasonably low prices from US drug makers, Americans have to pay more to subsidise the enormous cost of research and development,’ Trump stated. ‘In some cases medicine that costs a few dollars in a foreign country costs hundreds of collars in America for the same pill with the same ingredients, in the same package, made in the same plant, and that is unacceptable.’

In fact, Trump said he has directed US trade representative Bob Lighthizer to make it a top priority to end ‘the global freeloading once and for all.’ These reforms ‘are just the beginning,’ according to Trump. He noted that he’ll work with Congress in the coming weeks to pass legislation to address the high prices of medicines.