Protein and DNA sequencing pioneer passes away at age 95 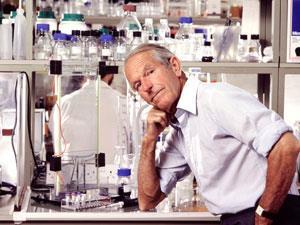 Double chemistry Nobel laureate Frederick Sanger died yesterday at the age of 95. The Laboratory of Molecular Biology (LMB) in Cambridge, UK, where he spent much of his research career confirmed his death this morning.

Sanger had a long and fruitful research career that started when he went to Cambridge University to study chemistry and physics. After abandoning the physics side of things, which he didn’t get on well with, he pursued a PhD in lysine metabolism.

After finishing his PhD he joined Charles Chibnall’s lab in 1943. Chibnall and his team had been looking at the structure of insulin and he suggested that Sanger try to work out the exact sequence of amino acids in this vital regulatory hormone. Using chemical labels to identify each amino acid, Sanger painstakingly uncovered the primary structure of insulin. The work was published in 1955 more than 10 years after he started to unravel this puzzle. In 1958, he received his first chemistry Nobel prize for his work on protein structure, particularly that of insulin.

In 1962 Sanger moved to the newly established Medical Research Council LMB. There he worked on DNA and nucleic acids and, when he became frustrated with the slow pace of analysis for these molecules, set out to find a faster way to sequence them. What he came up with, it is fair to say, revolutionised the study of nucleic acids. His dideoxy sequencing technique – also known as Sanger sequencing – made use of nucleotide analogues that can halt the replication of DNA. By adding radiolabelled bases to a growing DNA strand, along with tiny amounts of these disruptive nucleotide analogues, the position of bases in a target piece of DNA could be worked out. This mode of sequencing was still being used when the Human Genome Project produced a draft genome in 2000. Unsurprisingly, Sanger won the 1980 chemistry Nobel prize for his pivotal role in nucleic acid sequencing.

Sanger stayed at the LMB for the rest of his career as the institute built up a reputation as a Nobel prize factory. To date, researchers who have worked there have amassed 10 Nobel prizes, the most recent being this year’s chemistry Nobel prize winners Michael Levitt and Arieh Warshel.

Sanger retired in 1983 to his Cambridgeshire home. In 1993 the Sanger Institute was launched with its focus on genomics. After agreeing that the institute could be named after him, Sanger was reported to have said: ‘It had better be good’.

Tributes have poured in for Sanger with J Craig Venter, a genomics pioneer, saying on Twitter: ‘One of the most important scientists of the 20th century Fred Sanger has died. He twice changed the direction of the scientific world.’ Robert Parker, chief executive of the Royal Society of Chemistry, described him as ‘a giant of science who will be remembered for decades, for his work and also for his remarkable modesty’. He added: ‘His contributions towards chemistry transformed our understanding of the molecular systems of life and inspired a generation of scientists to explore the role of genetics in health and disease.’