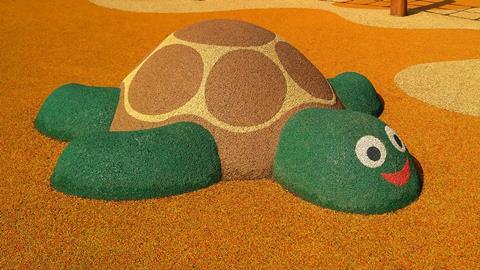 Artificial turf containing crumb rubber from shredded tyres has become increasingly common on playgrounds and running tracks. Despite anecdotes about ill health caused by these surfaces, there has been relatively little investigation of them. Now, exposure of chicken embryos to water containing chemicals from crumb rubber reveals it is toxic to their early development, especially their brain and cardiovascular system.1

‘Shockingly we found that half the embryos at day seven were so grossly malformed that they would never have developed,’ says Hans Larsson, comparative biologist at McGill University in Montreal, Canada. The remaining embryos looked fairly normal, but had shorter limbs and significantly less mass. ‘Development of blood vessels was retarded, and brain regions associated with higher order thinking and motor control were diminished in size. ‘We cannot say anything about human health at this point, but we can draw some inferences,’ Larsson says.

Schools, local authorities and sports organisations are replacing grass fields and playgrounds with artificial turf, as it is cheaper, saves water and is easier to maintain. There are already over 11,000 synthetic turf fields in the US and 13,000 in Europe.

Tyre crumb was soaked in water for a week, to simulate artificial turf exposed to rainfall, and then one of three treatments carried out: pipetting 1ml of leachate onto an egg, dipping an egg into leachate for 30 seconds or injecting 12µl into the egg.

Coating or dipping did not harm the embryo at seven days, but the microinjection impaired development. ‘The inferences we draw from the results is that crumb rubber is lethally toxic for chicken embryos and can alter developmental pathways,’ says Larsson. ‘Chickens are not that different from humans, and this should open our eyes to some concerns.’

The effects were likely due to a complex mixture of chemicals leaching from the crumb rubber such as zinc, chromium, lead and arsenic. One particularly concerning chemical is benzothiazole, a potential mutagen and carcinogen.

Most toxicological experiments on crumb rubber have been performed on the tiny crustacean Daphnia and on algae. The effects on higher vertebrates, including humans, are unknown. Over 300 chemicals have been identified in crumb rubber, the paper notes, with 200 predicted to be cancer-causing and genotoxic.

‘Common sense tells us that when you expose developing creatures to a cocktail of plasticisers and heavy metals, one should expect cancers, developmental issues and birth defects,’ says ecotoxicologist Sharon Pochron at Stony Brook University in New York, though this study is ‘the first to verify that expectation’. She previously reported that aged crumb rubber reduces survival time in earthworms.2

Most scientists familiar with the literature on artificial turf conclude that it isn’t very dangerous, but this assessment is problematic, Pochron says. This is because babies and toddlers play on artificial turf in parks and schools and continue to do so throughout childhood. Babies and children are closer to the ground and get larger doses of contamination. ‘They taste crumb rubber, they eat the crumb rubber,’ Pochron adds.

The new results ‘suggest that we should think twice before we release this common contaminant into the environment, especially an environment designed for children and their potentially pregnant mothers’, says Pochron. ‘Having kids romp in a pile of metals and amines just isn’t a great idea.’

‘About 50% of all tyres get recycled into crumb rubber, which goes into artificial turf and playgrounds,’ says Larsson. ‘My own personal feeling is that there are alternatives that do not contain these materials and we should be using those.’