UK government urged to cash in on waste 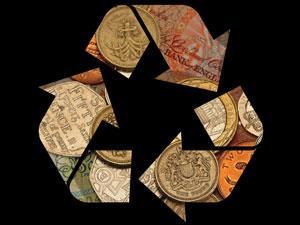 From orange peel and coffee grounds to gases from factories, waste is inevitable. But rather than seeing waste as a problem, the government should consider it a valuable resource, says a report by the House of Lords Science and Technology Committee. Using cutting edge technologies, wastes can be converted into fuels, flavours and fragrances, plastics, paint or pharmaceuticals. But the report raises concerns that the government has not recognised this opportunity to create a multibillion pound ‘bioeconomy’.

‘Waste or resource? Stimulating a bioeconomy’ focuses on carbon-containing waste, which includes organic wastes such as food, agricultural and forest residues, sewage sludge, plastics, and waste gases from industrial processes or landfill sites. The UK produces around 100 million tonnes of this waste every year.

‘The UK…has the scientific know-how and the industrial will to turn this waste into wealth,’ says John Krebs, who chairs the committee. ‘But we are concerned that the government is not seizing this opportunity – there is a huge amount at stake here, economically and environmentally, and no single department appears to be leading the way.’

The government should be doing more to encourage the growth of this industry, Krebs says. For example, a more standardised system of waste collection across local authorities would be helpful, and would reduce waste exports: the UK could have produced 150,000 tonnes of bioethanol with the waste exported in 2012.

It is difficult establishing the quantity and quality of waste as there is no single source of information, the report points out. So it also recommends a government minister should take on the role of ‘Waste Champion’ to co-ordinate action and policy across different departments.

Moves have already begun within the waste sector to view discarded materials as potential resources, says Jacob Hayler, an economist at the Environmental Services Association (ESA). During the past decade, the landfill tax escalator has steadily increased disposal costs so alternative uses of waste have become economically viable.

ESA estimates that moving the UK to a circular economy – whatever can’t be recycled is used to generate energy – could generate 50,000 new jobs with £10 billion of investment, boosting the UK’s GDP by around £3 billion. But Hayler stresses that exploiting these opportunities presents significant challenges. For example, waste facilities may not be able to secure the feedstock they need to generate a return; while markets for some of the ‘products’ identified in the report are still immature and uncertain.

‘The best thing the government can do is to keep policy stable and to signal it well in advance to maximise certainty to investors,’ he says. ‘The report talks a lot about exploiting high-value opportunities. These will require the application of investment and innovation to come to fruition. This needs policy certainty above all else.’

Dustin Benton from the environmental think-tank Green Alliance, agrees with Hayler that feedstock availability is a barrier to developing a UK industry. ‘Companies building lower-value energy recovery plants may find that plants with higher-value material and fine chemical extraction will take feedstock away in the medium term, especially as energy subsidies come down over time,’ he says. ‘It’s already clear that cellulosic ethanol start-ups are reorienting towards high-value chemicals.’

Another hurdle is support for commercialisation, he adds: ‘The UK has excellent R&D but a poor record of commercialisation. We need to link innovation policy and industrial strategy to the goal of capturing more value from waste.’ Food waste could generate £693 million each year if it were diverted from landfill to anaerobic digestion, for example.

But most work in the UK is in the lab, or planned but not yet operational, Benton says. Interesting projects include converting whisky byproducts into salmon feed at Heriott Watt University, Celtic Renewables’ proposed biobutanol plant, and Sinvestec’s plans to build a biorefinery to convert sugary waste into bioplastics.