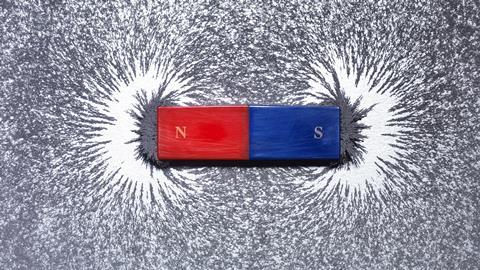 A new step towards quantum control of chemistry has been achieved by researchers in the US, who found that tuning the magnetic field applied to colliding ultracold molecules could alter the probability of them reacting or undergoing inelastic scattering by a factor of over 100.1 The work could potentially prove useful for producing large ensembles of molecules in the same state and investigating their properties.

At room temperature, the random thermal motion of atoms and molecules blurs the quantum nature of chemistry. In an ultracold regime, however, this thermal motion is stilled, revealing chemical interactions as quantum interference processes between matter waves. Remarkable phenomena have been seen in ultracold atomic gases, such as the creation of Bose–Einstein condensates, in which atoms all enter the quantum ground state of a trap, allowing a macroscopic view of their quantum wavefunction. Wolfgang Ketterle at the Massachusetts Institute of Technology (MIT), whose group performed the new research, shared the 2001 physics Nobel prize for the creation of this condensate.

Cooling molecules to the ground state of a trap is much trickier than cooling atoms because they can contain thermal energy in so many internal degrees of freedom, and was only achieved by Jun Ye of JILA in the US and colleagues recently.2 In 2020, Ye’s group applied an electric field to potassium–rubidium molecules, which decay into diatomic potassium and rubidium molecules. The researchers showed that, at a specific field, the molecules were excited into states forbidden by quantum mechanics and could get close enough to react. This drastically slowed the decay rate. ‘For our system, we typically think that, if the two molecules get very close together, there is close to a 100% chance that they will undergo a chemical reaction,’ explains Kyle Matsuda, Ye’s PhD student and the 2020 paper’s lead author.

In the new research, Ketterle’s group went one stage further, using a variable magnetic field to study collisions between sodium atoms and sodium lithium molecules. Such a collision can have three possible outcomes: they can collide elastically, they can collide inelastically or they can react to form, for instance, atomic lithium and diatomic sodium. The latter two both constitute loss as the particle under study disappears from the trap. Whereas electric fields affect particles at much greater distances, explains Hyungmok Son – the new work’s lead author – ‘magnetic fields don’t really affect the way particles interact at long range – it’s still a van der Waals interaction’. However, the researchers found that the magnetic field could still have dramatic effects.

The researchers studied two ‘Feshbach resonances’ at which the wavefunction of [free] colliding particles mixes with that of an atom–molecule bound state. As they tuned the field through these, they found the loss rate suddenly spiked. ‘We directly tailor the quantum wavefunction by tuning the magnetic field and this influences the outcome of a collision,’ explains Son. They were therefore able to influence the outcome of a collision by directly tailoring the quantum wavefunction. Intriguingly, the two Feshbach resonances behaved differently, with the higher-field one showing much less amplification. The researchers calculate that, whereas the stronger resonance is more likely to populate a long-lived intermediate that causes strong interference and reactions, the weaker resonance populates a more chemically reactive intermediate which makes interference weak. ‘We quantitatively explained two distinct loss mechanisms associated with atom-molecule Feshbach resonances,’ Son adds.

Simon Cornish at the University of Durham agrees. ‘We’ve always felt that molecular collisions and atom–molecule collisions are going to be horribly complex and difficult to control, and that’s why people like Jun and other groups have invested so much time into methods of shielding those collisions by changing the long range behaviour to stop them getting to the complicated short range stuff,’ he says. ‘But this MIT work has found a system where the short range stuff is simple enough that it actually is controllable, and that gives us hope that there will be other systems like this, and we will be able to use them in a system more akin to what we do in atomic gases.’

Update: The paragraph covering Feshbach resonances was corrected on 30 March 2022