Ultrafast data-recording without the heat 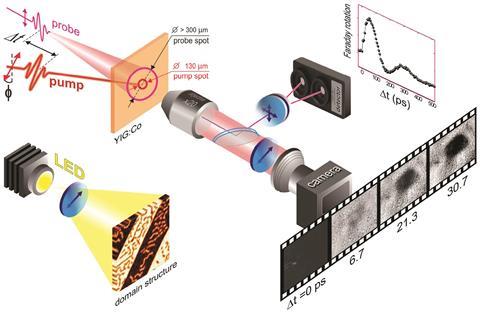 Schematics of the time-resolved magnetisation dynamics and single shot imaging. The inset shows the magneto-optical visualization of the magnetic domains formed by a single laser pulse excitation of yttrium garnet film

A new ultrafast way to record information on a magnetic material significantly cuts the amount of heat generated when saving information, so might one day save data centres millions on cooling costs.

Overheating is a significant risk at large data centres, for example those used to support the high demands of cloud storage. The physical process of recording data often generates heat as a by-product. Estimates suggest that for many offices, running and cooling servers can account for as much as 70% of their total electricity use.

The new technique, developed by researchers in Poland and the Netherlands, uses pulses of polarised light to switch between two stable magnetic states on a cobalt-doped yttrium iron garnet film. Switching the magnetisation of microscopic sections of the garnet effectively writes ‘0’ and ‘1’ magnetic bits of information. The technique can write one bit of information in under 20 trillionths of a second. The heat produced by this recording event would be just 22 quintillionths of a joule – roughly a billion times less heat than would be produced writing the same amount of information on a standard hard disk drive.