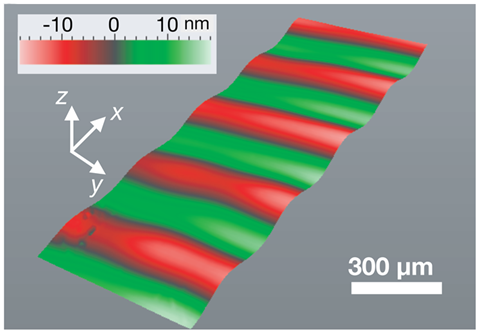 On application of a current, the piezoelectric material begins to vibrate, creating soundwaves that can  trap water in nano-sized cavities

Sonochemistry studies how soundwaves spark chemical reactions. Mechanical waves can trigger the formation of microbubbles that release a massive amount of energy when they implode – a phenomenon known as cavitation. Within the bubbles temperature and pressure increase rapidly, leading to the formation of free radicals and producing chemical transformations, such as water splitting.2 However, chemical engineers have now observed the generation of radicals without cavitation, something that, so far, had only been theorised.3

‘This is a really new phenomenon,’ explains Sergey Nikitenko, an expert in sonochemistry working at the Marcoule Institute for Separation Chemistry in France. ‘They use ultrasonic waves to split the water molecule without cavitation,’ he adds. The key difference is the type of soundwaves. Usually, researchers use ‘bulk’ ultrasound ranging between 10 and 100kHz. However, in this case the team irradiated their samples with high frequency surface waves above 10MHz – ‘these are frequencies we used for ultrasound imaging’, explains Nikitenko. 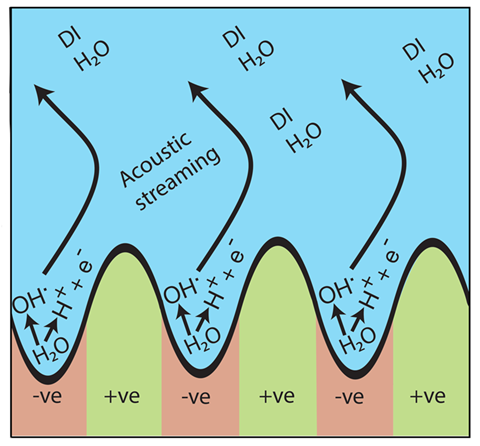 ‘Surface soundwaves don’t produce cavitation, yet one of my postdocs, Amgad Rezk, observed the formation of radicals,’ says Leslie Yeo, from RMIT University, Australia, who led the study. ‘The process is quite simple, we just deposit a single drop of deionised water on a lithium niobate single crystal substrate,’ says Yeo. This is a piezoelectric material that starts vibrating once an electrical current is applied. Once it starts vibrating this provokes a ‘nano-earthquake’ of mechanically-generated soundwaves that are just a few nanometres tall. The team believes these waves ‘trap’ the water molecules, and the electricity splits them to form hydroxyl radicals. ‘It seems sound creates a nanocavity for water, and the electric field creates a nano-electrode,’ says Nikitenko.

To detect radicals, the team used electron paramagnetic resonance, a technique that identifies species with unpaired electrons. ‘Moreover, we also observed them indirectly with luminol, which reacts with radicals to release light,’ adds Yeo. Experiments with methylene blue, which oxidises in the presence of radicals, further confirmed their finding. To rule out cavitation, researchers thoroughly degassed the system and the reaction still occurred. No sonoluminescence was observed either – a known consequence of the formation of microbubbles. ‘They provide very convincing evidence for all these effects,’ says Nikitenko.

‘Free radicals can be used to drive many chemical and enzymatic reactions,’ says Yeo. ‘They can also drive the decomposition of various materials, and hence can be useful to remove certain dyes and pollutants,’ he adds. This approach eliminates the need for expensive catalysts and avoids electrode corrosion, meaning it could become a greener and more sustainable alternative for radical generation.