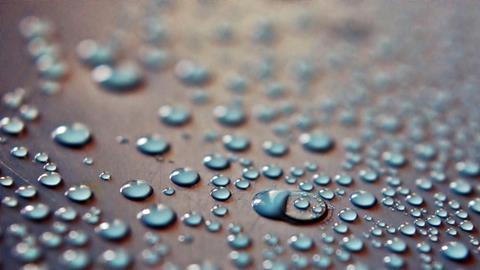 Chemists at Stanford University in the US have made the surprise discovery that microscopic droplets of pure water will spontaneously produce hydrogen peroxide without any other reagents or external stimuli. The unexpected observation could lead to more environmentally-friendly and cheaper production of hydrogen peroxide, and greener chemical synthesis.

The team, led by Richard Zare, made its discovery while trying to synthesise gold nanostructures in microdroplets. The researchers found that water molecules were oxidising to form hydrogen peroxide at concentrations of around 1ppm in the micron-sized drops.

They suggest that the microdroplet environment itself promotes redox chemistry at the surface of the droplet, where water ionises to form H+ and hydroxyl ions. ‘What seems to be happening is that at the interface between air and water … you have a big charge separation between the OH– and the H+,’ Zare tells Chemistry World. ‘The OH– tends to want to stick to the air more than the H+, which likes water, and this leads to a very large electric field being set up at the interface.’ That electric field is roughly 10 million volts per centimetre – much larger than one could generate in the lab, Zare notes. This field ionises the hydroxyl ions, creating hydroxyl radicals which then combine to form hydrogen peroxide.

‘What’s beautiful is that in some sense all that is ever leftover when you finish is water … nothing is more green than to just have water,’ Zare adds. ‘I am hoping that this will turn into something big, because we are talking about a very green form of chemistry, a very environmentally-friendly way of doing things.’

The team used a microscope setup to observe the phenomenon (B). Microdroplets of water (in the size range 1–20µm) sprayed on to a glass surface produce hydrogen peroxide, which reacts with PF-1 present in the droplets to produce the fluoresecent molecule fluorescein that can be detected by the microscope (C, left). In bulk water, no fluorescence is observed (C, right).

Ryan Sullivan, an atmospheric chemist at Carnegie Mellon University, US, and associate director of its Institute for Green Science agrees that this finding could make chemistry more environmentally-friendly. ‘Hydrogen peroxide is a very valuable green oxidant … it decomposes into very safe components,’ Sullivan says, adding that most of the major synthetic pathways currently available to make hydrogen peroxide at scale are not very green. ‘[The microdroplets] only make low parts per million levels [of H2O2] spontaneously, but if you can figure out how to accelerate that or enhance that even further, that could be from a practical or applied perspective quite useful,’ Sullivan concludes.

The discovery could also lead to safer cleaning and food processing, Zare points out. ‘We are killing such things as E. coli and Salmonella by just spraying little water droplets at them in air … we are excited about this,’ Zare continues. Terry Collins, a chemist who directs the Institute for Green Science at Carnegie Mellon University in Pennsylvania, US, says the proposed mechanism appears to be sound. ‘This is a beautiful discovery that opens up a large range of very fascinating questions,’ Collins says, such as whether the process is more generally useful for cleaning chemical contamination from the air as well as on surfaces.

Zare hints that this finding could also shed light on the origins of life on Earth. ‘What is exciting about all of this is that it shows that water droplets have the ability to do redox chemistry,’ Zare explains. He says water droplets can be thought of as artificial cells, and they can be quite reactive. ‘We have seen that in microdroplets all types of processes can happen that can’t happen in bulk water.’

Correction: This article was updated on 13 September 2019 to correct the description of water ionisation