An international team of researchers has developed what they claim is a way to make atomically thin layers of almost all conceivable transition metal chalcogenides (TMCs). These two dimensional materials have a wide range of potential uses from electronics to catalysis, but until now only a small selection have been studied as they are so hard to make.

Metals (purple) and chalcogens (yellow and orange) that can formed layered sulfides, selenides and tellurides

TMCs are combinations of transition metals and the chalcogen elements found in group 16 of the periodic table. Previously, only a handful of these compounds had been produced – typically by exposing a metal precursor to a chalcogen-containing atmosphere at high temperatures. However, the high melting points of the metal precursors has limited the number of different TMCs that could be made using this approach.

Now, a team led by Zheng Liu of the Nanyang Technological University, Singapore has shown that the melting points of the precursor compounds can be lowered by combining them with salts such as sodium chloride and potassium iodide. By using this molten-salt-assisted chemical vapour deposition method, the team grew 47 single atom thick TMCs, including binary compounds, alloys and heterostructured compounds. Of these 47 materials, 35 are completely new to science.

‘Using salt, we developed a universal method for the synthesis of almost all the 2D TMCs,’ says Liu. ‘The number of the alloys and heterostructures could be unlimited due to a huge number of combinations.’ 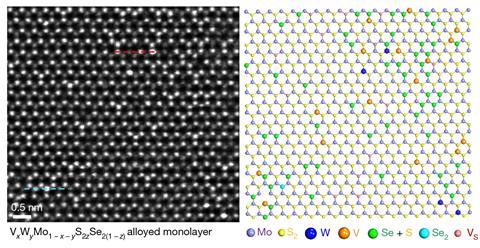 One of the monolayer alloys that the team produced contains five different elements – vanadium, tungsten, molybdenum, sulfur and selenium – and Liu states that even more elements could still be added to it.

Describing the potential uses of two dimensional TMCs, Liu lists electronic devices, semiconductors, data storage, optics and heterogeneous catalysis as areas where these compounds could make an impact, while he also notes that at least three of the TMCs are superconductors. ‘This is a giant leap for the real application of 2D TMCs,’ he adds.

Despite the broad scope for these sorts of materials, the difficulty in making them means that few have been made, let alone fully investigated notes Yoshihiro Iwasa, who researches two-dimensional materials at the University of Tokyo, Japan, and was not involved in the project. The new findings ‘should be an important platform for further functionalities of new 2D materials’, he adds.

Looking to the future, Liu says that the team wants to improve the quality of the monolayer growth and are seeking to produce wafer-size samples of the new materials for tests.