When it comes to reducing carbon dioxide, being well coordinated is a disadvantage

Scientists in Japan have shown that they can use coordination number to turn first row transition metals into carbon dioxide reduction catalysts.

Now, Kazuhide Kamiya from Osaka University and his colleagues have paved the way for reducing carbon dioxide using cheap and abundant metals previously thought to be useless. The researchers made nickel and cobalt complexes with different ligands to investigate if changing the metal’s coordination number could improve their ability to reduce carbon dioxide.

They made covalent triazine frameworks that stabilised the nickel and cobalt centres without saturating their first coordination spheres, as well as nickel and cobalt complexes containing tetraphenylporphyrin supports, where the metal centres were coordinated to more ligands. The covalent triazine framework metal complexes had a lower free energy barrier for converting carbon dioxide to carbon monoxide. These results show that reducing the number of electrons in the outer shell of the transition metal species reduced the Gibbs free energy change and increased the metal’s efficiency as a carbon dioxide reduction catalyst. 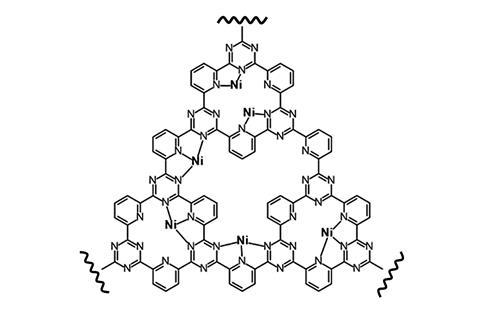 Kamiya believes that these results have the potential to change the direction of carbon dioxide reduction research. ‘Generally, in the field of organometallic electrocatalysts, it is believed that there is strong relation between metal species and reaction. However, our work might defeat these stereotypical images between metal and reaction.’

However, the results are preliminary and the researchers acknowledge that the covalent triazine framework is not stable enough for industrial-scale applications. Krishnan Rajeshwar, an electrochemical catalysis expert from the University of Texas at Arlington, US, says ‘one limitation is that only the two electron reduction route is demonstrated. More practically important are deeper reduction pathways leading to liquid products [such as alcohols].’