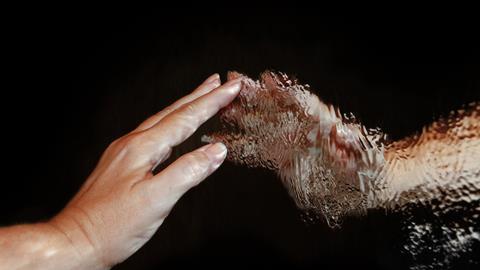 Magnetism and electron spin have been harnessed to create a new way to separate and identify enantiomers – molecules that have a mirror image or chiral counterpart, akin to left and right hands. The approach could offer a broad, cheap and simple way to isolate certain chiral molecules, something that can be crucial to create safe drugs and pesticides.

Magnetism and chirality became associated when Louis Pasteur first discovered chirality, or handedness, studying tartaric acid in the mid 19th century. He subsequently found that the chemistry of life tended towards molecules with a specific handedness. He attributed this to a general theory that the Earth was ‘handed’ too, based on its rotation and the polarity of its magnetic field. But Lord Kelvin was among those who disagreed, maintaining that magnetic rotation alone could not induce chirality. Pasteur went so far as to try – and fail – to induce handedness in molecules by applying a magnetic field.

Now, an international group of researchers has added a new chapter to the story by using magnetism to identify and separate chiral molecules. However, it is not a vindication of Pasteur because it is not the magnetic field itself that controls the interaction. Rather, it’s due to the direction that electrons spin through opposite chiral molecules, which magnetism can tease out.

‘Currently, the separation of chiral molecules is expensive and demands a tailor-made approach for each kind of molecule,’ says Yossi Paltiel at Hebrew University in Jerusalem, Israel, who co-led the study. ‘We have discovered a uniform method that will enable pharmaceutical and chemical manufacturers to easily and cheaply separate right from left chiral molecules to obtain products with pure chirality.’

Knowing your left from your right 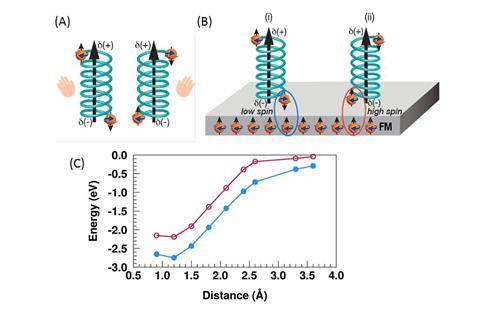 Theoretical underpinnings. (A) A schematic cartoon of the polarisation. The electrical polarisation of the molecule is accompanied by spin polarisation. The spin alignment at each electric pole depends on the specific enantiomer. The horizontal arrows present the rotation while the perpendicular arrows present the ‘spin direction’. (B) Therefore, for a specific enantiomer the interaction between the magnetised surface and the molecule follows either a high spin (i) or a low spin (ii) potential, depending on the direction of magnetisation of the substrate. (C) Calculated interaction energies as a functionof distance between a hydrogen atom and a surface represented by a 2x2x2 cube of nickel atoms. All spins of the nickel atoms are aligned parallel to each other and the hydrogen atom spin is aligned either parallel (red curve) or anti-parallel (blue curve) to the spin of the nickel atoms

This is particularly important for drugs and agrochemicals because while enantiomers contain the same atoms, their asymmetric structure means they can have drastically different interactions with biological molecules, such as DNA and proteins. The results can be tragic. Thalidomide, a drug containing an equal mix of enantiomers, was prescribed in the 1950s and 1960s for morning sickness in pregnant women. While the right-handed molecule relieved nausea, the left caused birth defects.

Following previous studies into the way electrons and chiral molecules behave in a magnetic field, the team saw the possibility of a new chiral separation and recognition approach. It works because when electrons move though chiral molecules their transport is dependent on whether they are spinning clockwise or anticlockwise. Known as the CISS effect (chirality-induced spin selectivity), electrons behave like small magnets that either move up or down through a chiral molecule depending on the handedness of the molecule and the direction of motion.

By exposing mixtures of chiral molecules to a gold surface that was magnetised in one direction the researchers used the CISS effect to separate and identify their handedness as one enantiomer was adsorbed onto the gold surface while the other was not. ‘Although we expected those results, they were so different from the dogma that we had to repeat them many times to convince ourselves that indeed it works,’ explains Ron Naaman, whose lab co-led the work at the Weizmann Institute of Science, Israel.

‘By cleverly exploiting both properties of the substrate and properties of how conditions change within the molecule, they’ve turned this [CISS] effect into the dominant thing driving the dynamics,’ comments David Patterson, who investigates chiral molecules at the University of California Santa Barbara, US. ‘This is exciting because it realises chiral separation, and chiral recognition, based on a very different physical process of the molecule than other techniques, like chromatography and circular dichroism.’

David Waldeck, who studies the CISS effect in chiral molecules at the University of Pittsburgh, US, and who has previously collaborated with the researchers, agrees. ‘The work suggests a wholly new strategy for performing enantioselective separations. It should work for nearly any – barring reactive interactions – racemic mixture of chiral molecules.’