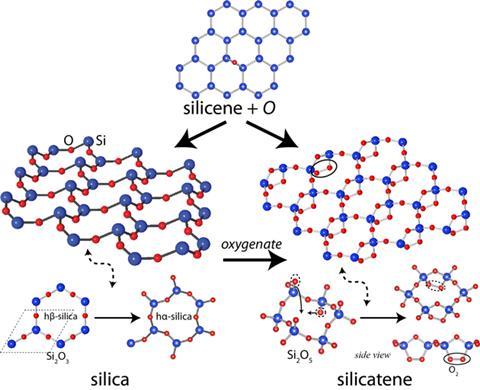 A graphene-like allotrope of silica with unusual physical and electrical properties has been predicted by theoretical chemists in Turkey. The material, say the researchers, should get thicker when stretched and have a bandgap that varies with mechanical strain. Other leading physicists, however, have cautioned that actually synthesising the material may not be possible.

The remarkable mechanical and electrical structures of graphene have led scientists to investigate other two-dimensional structures such as silicene, a graphene-like ‘honeycomb’ structure with silicon atoms in place of carbon. Bulk silicon, unlike graphite, does not consist of two-dimensional layers, so it is not possible to separate one such layer to produce a free-standing monolayer.  However, Salim Ciraci and colleagues at Bilkent University in Turkey, have calculated that such adding oxygen to the silicene lattice produces a stable monolayer of silica (SiO2) that should be free-standing.

Oxygen atoms can bond either above or below the monolayer, and Ciraci’s team calculated that, with a small activation energy, it would be energetically favourable for these atoms to enter the plane, producing an Si2O3 structure in which an oxygen atom sits between each two silicons. They propose two new structures: in the first, which they named hß-silica, the bonds remain linear, producing a neat hexagonal structure. A small perturbation, however, would lead to a denser, more stable structure comprising buckled hexagons. The team say their molecular dynamics simulations indicate that this optimised structure, ha-silica, would remain stable up to 1000K (727°C).

Further calculations show the structure should have some interesting physical and electronic properties. Stretching the material would pull the bonds straight, causing the oxygen atoms to move out and the material to expand in the perpendicular direction. Materials with this property, called auxetics - used in blast curtains, surgical implants, and elsewhere - are commonly produced from specially tailored foams and polymers. Ciraci believes this is the first material whose atomic structure would make it intrinsically auxetic. Furthermore, the material would have a rather large, direct band gap of about 3eV. Stretching the material along one crystalline axis would increase this band gap, while stretching it in the perpendicular direction would reduce it.

Experimentalist Hans-Joachim Freund at the Fritz Haber Institute of the Max Planck Society in Berlin agrees the allotrope’s promised properties look intriguing, but believes that actually synthesizing it would probably pose a major challenge. ‘I’m not sure that you would ever be able to grow this stuff on something like a metal,’ he says, ‘because you would have to somehow circumvent that the oxygen wants to bind to the metal.’ Electronic structure theorist Artem Oganov at Stony Brook University is similarly sceptical: ‘The structure in principle could exist,’ he says, ‘but that doesn’t mean it’s thermodynamically stable and it doesn’t offer any recipes for synthesis.’