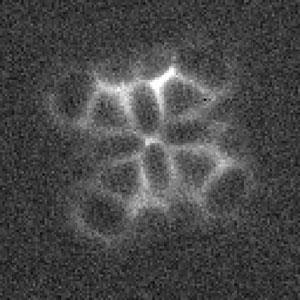 Researchers in the US have used a scanning tunnelling microscope (STM) to produce the latest images of structure and bonding in a single molecule, by sensing the molecule’s local potential energy landscape. The team says that the images show unusual patterns of hydrogen bonding both within the molecule and between adjacent molecules, where hydrogen atoms appear to be ‘shared’ between multiple centres.

The study, led by Wilson Ho at the University of California, Irvine, is the latest advance in imaging single molecules, which has already been achieved with atomic force microscopy, while an STM functionalised with hydrogen has previously been used to generate images arising from electronic information about chemical bonds.

Ho’s team attached a single molecule of carbon monoxide to the tip of an STM and used this to probe a molecule of cobalt phthalocyanine adsorbed onto a surface of gold or silver. As the tip passes over the different features of the sample molecule – the atoms and the bonds between them – changes in the energy intensity are picked up by the vibrations of the CO molecule, measured by a technique called inelastic electron tunnelling spectroscopy. In this way, an energy intensity map of the sample molecule is created, which translates into an image of the molecule.

Stefan Tautz of Jülich Research Centre in Germany, together with his co-workers, pioneered the use of STM for imaging the geometry of organic molecules by functionalising the STM tip with hydrogen and other probe particles such as carbon monoxide and xenon. ‘This new study, using carbon monoxide on the tip and recording the inelastic tunnelling signal, is a further beautiful example of the concept of introducing an additional degree of freedom to the sensing tip to obtain different type of information from the sample,’ he says. ‘I am certain that people will continue to explore and develop this general approach in the future.’

On the question of the apparent hydrogen bonding in the new images, however, Tautz remains ‘a little sceptical’.  He says, ‘There is no doubt that there is something there, and in our work we also saw something similar, but I am not sure that at this stage we can say for certain that these are images of hydrogen bonds.’