Do hydrogen bonds have covalent character?

Close scrutiny of how intermolecular interaction energies are calculated has cast doubt on evidence for the argument that hydrogen bonds are more covalent than electrostatic in nature.1 The evidence in question comes from charge transfer energies determined using the natural bond orbital (NBO) method. When used to study hydrogen bonding NBO can produce high values for charge-transfer energy, leading to the interpretation it dominates the overall interaction. That interpretation ‘cannot be sustained’, according to Anthony Stone from the University of Cambridge, UK.

Stone’s criticism of NBO continues controversy over the nature of hydrogen bonding that has been ongoing since the 1960s. One view is that a hydrogen bond is mainly an electrostatic attraction between charge distributions on hydrogen and another, electronegative, atom. The other is that hydrogen bonding involves transfer of electrons, and therefore charge, between atoms, which gives it covalent character. ‘That issue has never really been resolved, partly because of these results which support the argument that it’s essentially chemical bonding,’ Stone explains.

Today, there is experimental and theoretical evidence that hydrogen bonding involves some charge transfer – but debate still rages over how much. NBO suggests it dominates, while Stone and others had noticed that other calculation methods found a smaller role for charge transfer. The reasons for these differences were unclear. 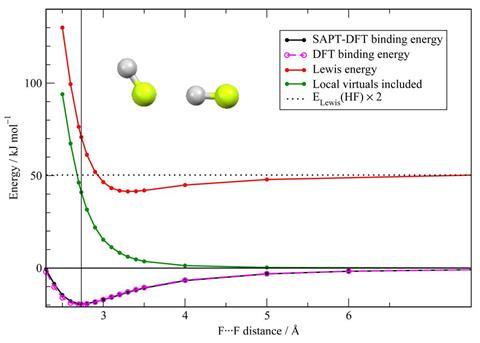 The energies of interactions between two hydrogen fluoride molecules at various separations. The overlying magenta and black lines are the energies calculated using DFT and SAPT/DFT, respectively. The red line is the reference energy used for NBO calculations, with just the changes in energy considered, but Stone argues that this leads to an error of at least the magnitude of the green line.

According to Stone, the problem arises from how the electronic density around molecules is broken down into the natural bond orbitals that give the method its name. The approach provides inadequate ‘basis set’ information that gives individual hydrogen fluoride molecules incorrectly high energies, he says. Starting from this high-energy reference, the NBO calculation of charge transfer energy combines both the basis sets previously used for the separate molecules. ‘That has the possibility of improving the description of each monomer, because it’s a bigger basis set,’ Stone explains. ‘That compensates for the erroneously high energy as well as describing the charge-transfer effect itself, so you get a binding energy that is larger than it ought to be.’

‘NBO analysis is not itself a method for quantitative calculation of such energies,’ counters Clark Landis from the University of Wisconsin (UW), Madison. Landis, who has co-authored two books and around two dozen articles on applying NBO to chemical problems, says that the accusation of superposition error is a ‘mischaracterisation’. The disagreement originates from how the different approaches treat electronic orbitals, he explains. ‘Charge transfer estimates from NBO correlate well with virtually all important experimental indicators of hydrogen bonding for a large number of systems,’ he says. ‘Professor Stone seems to focus only on NBO energies where we tend to focus on analysis of charge density shifts.’

Landis puts the disagreement between calculation methods down to ‘how similar terminology is taken to mean different things’. Landis’ UW Madison colleague and NBO pioneer Frank Weinhold adds that the vocabulary of charge transfer means different things to different people. ‘Finding the precise mathematical “translation” between divergent verbal/conceptual frameworks should be a useful step in clarifying the terms of disagreement,’ Weinhold says.

Elangannan Arunan from the Indian Institute of Science, Bangalore, thinks Stone’s paper will ‘attract experts on the two sides of the debate’. Though Arunan’s team has suggested that hydrogen bonds do not have covalent character using NBO,2 he is not sure that such energy decomposition analysis ‘will lead to any predictive power in advancing science’. ‘Hydrogen bonding has contributions from electrostatic, induction, dispersion, exchange correlation and charge-transfer covalency, and all that can be experimentally measured is the interaction energy,’ he says. ‘All the methods for decomposing them are models, and we should not forget that.’