A court in New York, US, has agreed a controversial bankruptcy settlement for Purdue Pharma that also puts an end to thousands of lawsuits. Post-bankruptcy, the company will be renamed Knoa Pharma. It will be largely owned by the National Opioid Abatement Trust, with profits funding programmes to prevent and treat addiction. But the Sackler family, who owned and ran Purdue, have escaped liability. They also get to keep most of their vast fortune. 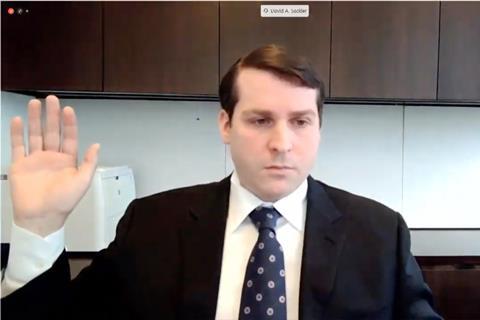 David Sackler (pictured), with his father Richard, and a long list of family members and associates, will be protected from further lawsuits as part of the settlement.

Purdue started pushing opioid drugs for chronic use after its timed-release painkiller OxyContin (oxycodone) was approved in 1996. While this strategy made many billions for the company – and other opioid-makers – it left millions of people ravaged by addiction. The US Centers for Disease Control estimates opioid abuse has killed more than half a million people in the past couple of decades.

Federal judge Robert Drain agreed to the settlement, with a few minor changes, at the end of August. He spent six hours explaining the background to his decision, describing the case as the most complex of his career. He expressed his frustration at the way the Sacklers had managed to squirrel so much of their vast fortune away in offshore tax havens. But, on balance, he decided he should allow the settlement because of the costs of delaying, and the amount of money it would direct towards addressing the opioid epidemic.

The Sacklers have also been afforded the type of post-bankruptcy protection more normally given to companies, without having to go bankrupt themselves. They will pay about $4.3 billion (£3.1 billion) in instalments over the next decade or so, largely funding programmes to prevent and treat addiction. The money will go to states and Native American tribes, alongside payouts to more than 130,000 individuals, who will each receive up to $48,000. The family of the late Raymond Sackler responded to the decision, stating: ‘This resolution is an important step toward providing substantial resources for people and communities in need, and it is our hope these funds will help achieve that goal.’  However, the sum represents only a fraction of the fortune the extended family made through Purdue.

Knoa will not be allowed to promote any opioid products, and the Sacklers will have no involvement in the business. Its portfolio will include products designed to address opioid addiction and overdose, such as an over-the-counter naloxone nasal spray and an injectable form of the opioid antagonist nalmefene. These are currently under development.

Although most of the plaintiffs supported the deal because of its potential to help ease the epidemic, some – including Washington State – have already signalled they plan to appeal. ‘This order lets the Sacklers off the hook by granting them permanent immunity from lawsuits in exchange for a fraction of the profits they made from the opioid epidemic,’ says Washington attorney-general Bob Ferguson.

The whole story of what went on at the company will now never be heard in open court. The family did, however, agree to release more than 30 million emails and other documents that could, ultimately, shed more light on Purdue’s shady practices. But they continue to deny that they have any responsibility for the opioid epidemic – former president Richard Sackler even testified to this effect, and offered no apologies.

Harry Nelson, founding partner at Los Angeles-based law firm Nelson Hardiman, believes that while Purdue Pharma as an entity paid the maximum price, this is not the case for the family. ‘The Sacklers end up paying a relatively small part of the fortune they made through their terrible activities,’ he says. ‘They have worked hard to transfer the money to family members and hide it within trusts so that it is not reachable.’

However, he thinks the settlement will not mark the end of direct claims against the Sacklers, and there is an outside chance of criminal charges as well. ‘I think we are going to see states and plaintiff lawyers looking hard at civil and criminal liability since it looks like the bad actors in the family largely got off scot-free,’ he says.

Unless any of the appeals against the settlement succeed – and Nelson is skeptical that they will – this should be the end of the litigation against Purdue. However, other multi-defendant lawsuits against opioid makers are still under way. At the end of July, a $26 billion settlement led by the New York attorney general covered McKesson, Cardinal Health, Amerisource Bergen and Johnson & Johnson. Nelson says this means a substantial number of cases are now resolved. But in contrast to the Purdue bankruptcy, which is binding on all parties, dissenting states can opt out. ‘I expect several will, so these four companies are still going to be dealing with some litigation,’ he says.

And other lawsuits are still in court. ‘Several major defendants, such as Mallinckrodt, Rochester Drug Cooperative, Endo, Teva and Allergan Finance, are still fighting the fight,’ Nelson says. ‘These settlements will put more pressure on those companies to settle as well… but until they do, we still have a heavy load of opioid litigation.’

Ed: This story was updated on 8 September to include a statement from the Raymond Sackler family