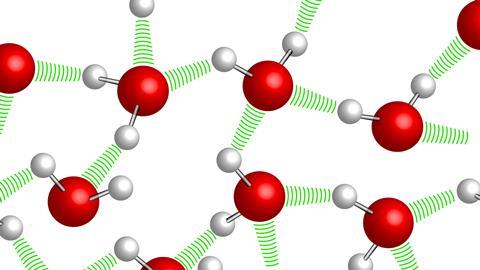 US scientists have developed a method to investigate basic hydrogen bonded systems, providing evidence for the importance of covalency in the ongoing deliberation over hydrogen bonding.

Though hydrogen bonds are ubiquitous in almost every aspect of life, the exact nature of the interactions is still somewhat a mystery. It has been a topic of much controversy over the last century, with a range of opinions from scientists across the world.

The subject also caught the interest of John Galbraith at Marist College. ‘Having taught undergraduate students for years that hydrogen bonding is an “electrostatic interaction between a hydrogen bound to F, O, or N and another highly electronegative atom” I always thought there must be more to it. It looked like a good question to tackle with valence bond theory.’

Alongside two of his undergraduate students, Galbraith decomposed the hydrogen bond energies of a range of basic hydrogen bonded systems to calculate the individual energetic contributions from geometry, polarisation, electrostatics and charge transfer.

They found that covalent interactions made up the majority of the bond energy, contrary to recent theoretical studies from University of Cambridge researchers, whereby electrostatics was found to be the dominant contribution using a density functional theory-based method.

Which method is correct? ‘That is a difficult question,’ says Steve Scheiner, a computational chemist at Utah State University in the US. ‘There are several partitioning methods for dissecting interaction energy. Each method defines its components differently, thus presents a different understanding of the importance of different components. There is no non-arbitrary definition of how to partition the full interaction so there is no unambiguous answer to such a question. This work presents just one more arbitrary method, with one more set of arbitrary conclusions.’

Célia Fonseca Guerra, a theoretical chemist at VU University Amsterdam in the Netherlands, agrees. ‘Numerous energy decomposition schemes based on different definitions have illustrated the impact and relevance of covalency in hydrogen bonds. As the starting points and definitions of these schemes vary, they result in somewhat different ratios between electrostatic interactions and covalency. However, since orbitals will never solely participate in a covalent interaction, but will be involved simultaneously in polarisation and donor–-acceptor interactions, it is difficult to separate these two terms from each other in a quantitative manner.’

When the orbitals of the hydrogen bonded complexes are allowed to optimise, the lone pairs can distort so as to minimise Pauli repulsion while the A fragment electron pair involved in hydrogen bonding can distort to maximise the electrostatic interaction with the H-bond hydrogen

However, Fonseca Guerra notes that the importance of such investigations is not so much the exact results of the study, but more in how these methods can be used to inform other areas of chemistry, like designing new materials. This is a view shared by Galbraith. ‘I think that as we understand more about how these systems work, it will be easier for people to start to design hydrogen bonded systems to do specific tasks.’