Scientists in Spain have devised a versatile technique that uses DNA to pull apart host–guest complexes so they can measure the overall strength of hydrogen bonds in that system. The method can distinguish forces as low as 0.1–1pN.

Procedures to measure supramolecular interactions in the bulk, under equilibrium conditions, are well established. But nature operates out of equilibrium, so scientists want a technique to measure hydrogen bonds in conditions realistic to living systems.

‘AFM was used previously to study the mechanical strength of these type of systems but they can’t be sure they are measuring a single molecule. It also doesn’t have the force resolution – they cannot go lower than 10pN,’ explains Borja Ibarra. ‘But we can measure differences of less than 1pN.’ 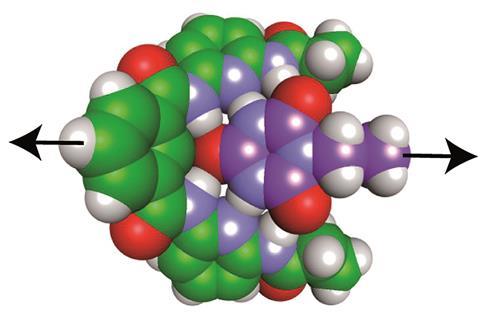 The scientists tested their technique on a model system: A cyanuric acid derivative docking with the Hamilton receptor

The technique, devised by Ibarra, Emilio Pérez and their colleagues at the Autonomous University of Madrid, tests the collective mechanical strength of hydrogen bonds out of equilibrium at the single molecule level, in water. It uses optical tweezers and DNA; the host–guest couple is covalently tethered to the 5’ and 3’ termini of one end of the DNA strand to guarantee that they are only testing one molecule. Pulling each strand in the opposite direction unzips the DNA helix and allows the scientists to measure the force needed to pull the complex apart.

To test the concept, they studied a model system – the Hamilton receptor with cyanuric acid derivatives as guests. They found it required 17pN to break all of the hydrogen bonds in the system. And if they disrupted one of those hydrogen bonds by adding in a methyl group it decreased that value by 1–2pN.

Petra Hellwig, a biophysicist at the University of Strasbourg in France, says investigating the strength of hydrogen bonds in complex molecules is one of the most important topics in physical and biochemistry. ‘The study revealed lower values reported before by AFM techniques, however in line with DFT calculations. This work is an exciting contribution to understanding these important forces [hydrogen bonds],’ she adds.

Pérez says they hope to answer questions about the nature of hydrogen bonds by measuring different systems. ‘We believe by playing with things – like the fluid or the salt concentration of the system – we might be able to answer some interesting questions.’