Hydrogen sulfide surprises as it's discovered to have hydrogen bonds

In his influential textbook, The Nature of the Chemical Bond, Pauling wrote that ice is structured by hydrogen bonds whereas solid hydrogen sulfide’s structure is controlled by van der Waals interactions. The latter are purely electrostatic interactions between dipoles whereas the former involve shared electron density similar to covalent bonds.

Pauling based his conclusions on the fact that solid H2S and ice look very different in their bulk state. In H2S, each molecule is surrounded by 12 others, whereas in ice, each molecule has only four neighbours. 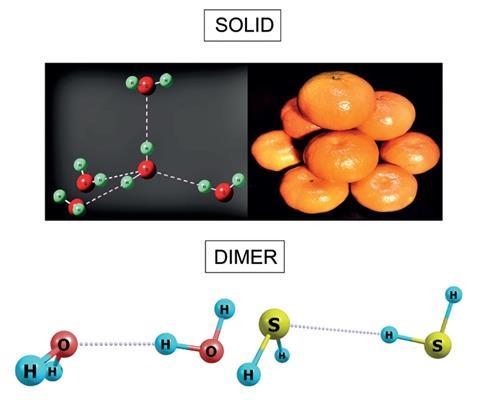 But at ultra-low temperatures, hydrogen sulfide forms dimers just like water does. And just like water, the compound responsible for rotten eggs’ smell forms hydrogen bonds, Elangannan Arunan from the Indian Institute of Science and colleagues have found.

Their microwave spectra, recorded at 3K (–270°C), are the first evidence of hydrogen bonding in H2S. They showed that the hydrogen on one molecule is closer to its neighbour’s sulfur atom than their combined atomic radii would suggest. Moreover, the two atoms are arranged in an almost linear fashion – both tell-tale signs of hydrogen bonding. Arunan’s team confirmed their findings with theoretical calculations.