Rules to distinguish between tetrel and hydrogen bonds 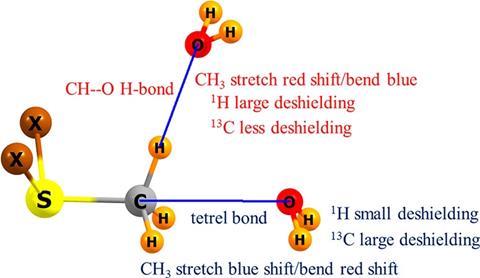 A US scientist has shown how scientists can interpret spectral data to differentiate tetrel bonds from trifurcated hydrogen bonds.

Methyl groups can act as hydrogen donors in hydrogen bonded systems. Methyl groups have also been found to participate in tetrel bonds, noncovalent bonds formed via bridging group 14 (C, Si, Ge etc) atoms. As other atoms surround the central carbon in methyl, for tetrel interactions to happen there is often a large steric barrier to overcome that distorts the molecular geometry around the bridging atom. Experimentally, researchers typically investigate bonding using NMR, IR and other spectroscopic methods, but hydrogen and tetrel bonds can be difficult to distinguish between spectroscopically, as the geometry of the two noncovalent interactions can appear similar, especially in complex systems.

Steve Scheiner at Utah State University wanted to provide guidelines for researchers to differentiate between the interactions. Using quantum calculations to investigate the vibrational and NMR spectral features of a range of methyl-containing systems, he detected key differences between the two types of bonding. Tetrel interactions, Scheiner found, had a blue-shifted methyl stretching frequency and a red-shifted bending mode, with the opposite true for hydrogen bonds. Tetrel bonds also appeared to have large 13C deshielding and small 1H deshielding compared to hydrogen bonds.