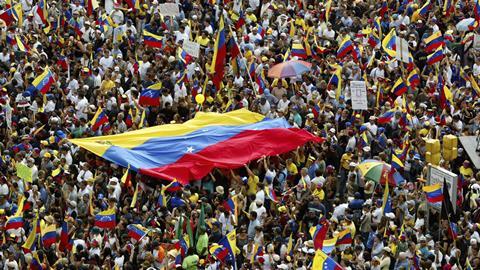 A mass exodus of Venezuelan scientists has hit the country hard in recent years, as the country grapples with the worst economic crisis it’s ever faced. The country’s labs have run dry of basic chemicals, and scientists face insurmountable hurdles purchasing or updating equipment or even covering the cost of publishing scientific papers.

Venezuela’s scientific heavyweights blame the socialist economic policies of former president Hugo Chávez and current president Nicolás Maduro, as well as the plummeting price of crude oil, which is estimated to make-up about 96% of the nation’s exports. ‘Basically, we cannot carry out research because we have no funds,’ says Ismardo Bonalde, a senior research scientist at the Venezuelan Institute for Scientific Research (IVIC). ‘We are losing these people at a devastating rate.’

High-level researchers, as well as those with newly minted master’s and PhD degrees in science fields, are leaving Venezuela for other Latin American countries, as well as Europe and US. At the IVIC approximately 20% of top-level scientists have left, retired or simply moved away from science in the last 10 years, according to Bonalde. ‘This is very, very serious,’ he warns, noting that the researchers who have left were full professors who were running labs.

The IVIC produces about 16% of the research papers that come out of Venezuela, Bonalde says. He estimates that these departed scientists were responsible for between 30 and 40% of the institute’s scientific publications.

The situation facing universities in Venezuela appears to be even worse. At Simón Bolívar University in Caracas, the number of full-time professors has plunged by nearly 50% in the last five years, from about 800 to between 400 and 500, Bonalde says. These high-level academics are all involved in research.

The school’s chemistry department used to have about 30 faculty members, but it has shrunk by between 20 and 30% over the last five years or so, says Benjamin Scharifker, a chemistry professor at the university.

Right now the system is all obscure, it is all fake – you don’t know where the money goes

At the Central University of Venezuela, also located in Caracas, there were approximately 2000 full-time professors four or five years ago, but that figure has now fallen to around 1200, according to Bonalde.

The dismal salaries are one major reason for the departure of the country’s researchers. Senior professors at preeminent universities in Venezuela earn the equivalent of around $50 to $80 (£39 and £60) per month. Things are much better not only in the US and Europe, but also in other Latin American countries.

‘If you go to neighbouring Colombia, or Ecuador, or Peru, or Brazil, you get several orders of magnitude difference – you get maybe $2000, $3000 or $4000 a month in those countries,’ explains Scharifker, who also serves as rector at the Metropolitan University in Caracas.

Last year, Scharifker says, Metropolitan University’s faculty was literally decimated. ‘One out of every 10 faculty members left the institution, and left for other countries,’ he recounts.

It’s not just the meagre salaries, but also miserable research conditions that have led scientists to flee Venezuela. Strict foreign currency controls that have been in place in the country for about 12 years have made it practically impossible to acquire the needed supplies for research, and to collaborate on the international scientific stage.

‘We are not free to exchange our currency into foreign currencies,’ Scharifker tells Chemistry World. ‘That limits our ability to obtain materials, to obtain reactants for experiments, to get equipment and to repair equipment, or even to travel to scientific conferences.’

Most academic libraries in Venezuela do not have their own subscriptions to scientific journals. For the last decade or so at Simón Bolívar University – one of the premier universities in the country – the library can only subscribe to a foreign journal with the approval of the vice president of Venezuela, says Rafael Rangel-Aldao, a biotechnology professor at the university.

When it comes to chemistry in Venezuela, there is minimal research in the areas of catalysis and hydrocarbons, and the nation’s once prestigious institute of oil research, Intevep, is ‘no longer even a shadow of what it was’, according to Claudio Bifano, a chemist at the Central University of Venezuela in Caracas and president of the Latin American Academy of Sciences.

In fact, Bifano says colleagues at Central University recently had to stop teaching undergraduate chemistry labs because they were short on reagents. He also notes that the scientific equipment at many of the school’s research labs was acquired last century and is outdated. ‘Publishing a scientific paper in a good international journal is a great achievement, not because there are not people capable of doing it, but because of the restrictions they have to overcome,’ Bifano states.

Alberto Fernandez, a chemistry professor at Central University, says there are virtually no nuclear magnetic resonance (NMR) spectrometers, and there is more defunct scientific equipment than functional. Fernandez works in laser spectroscopy, and he notes that one of the newest machines in his lab is a 12 year-old laser that is so old no spare parts are available. A basic optical component, like a mirror or lens, would eat up the lab’s entire annual budget. Fernandez describes the situation as a ‘tragedy’.

His university’s annual research budget is approximately VEF16 million (£1.2 million). For perspective, Fernandez points out that a personal computer costs around VEF800,000. ‘How can you buy liquid helium for a NMR instruments, or argon for inductively [coupled] plasma instruments?’ he asks.

Publications in preeminent top tier journals by Venezuelan researchers have plummeted by 45% when compared with 2008, according to Bonalde. Nevertheless, the scientific community in Venezuela remains hopeful. The country has a science and technology law requiring all companies of a certain size to deposit between 1 and 2% of their gross income into a ‘trust fund’ to finance research. Currently, however, the government takes the money and decides unilaterally which projects to finance. But the legislative branch of the Venezuelan government, the National Assembly, is expected to reform this law by, among other things, appointing highly qualified peer reviewers to assess the quality of the research project proposals that are being proposed.

‘Right now the system is all obscure, it is all fake – you don’t know where the money goes, you don’t know how the government administers the money,’ states Rangel-Aldao. ‘This will create a fund with transparency and also with high quality reviewing.’ It would also guarantee a set income for science.

The new law could be enacted as soon as January 2017. Scientists across the country agree that it would represent a huge step forward by breaking with the ideological obstacles that have been impeding Venezuelan science.

In addition, Venezuelans may vote in a referendum later this year that might mean a new government could be installed by January. ‘We have the institutions, the laboratories, the infrastructure; it is a matter of having the right policies so that people recover their enthusiasm and recover the resources to do the research,’ says Scharifker.

He and others note that there are extremely well-placed Venezuelans in countries like the US that stand ready to help bolster Venezuela’s scientific enterprise, if and when true change occurs there. One such example is Rafael Reif, a Venezuelan who has served as president of the Massachusetts Institute of Technology since July 2012.

Some observers suggest that such science superstars abroad don’t even need to return to Venezuela to make a huge difference. They say these leaders can help forge research collaborations with the country’s scientific community from their positions at preeminent international institutions.

‘The upside to all of this is that now we have people in very good places and, when this government changes … we will have the connections to all of these people that are well-located at first-rate institutions around the world,’ says Rangel-Aldao. ‘We didn’t have that before.’