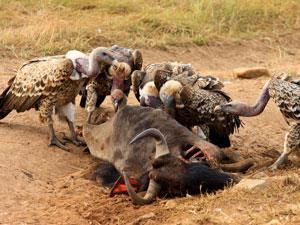 When India, Pakistan and Nepal banned veterinary use of the painkiller diclofenac in 2006, the region’s vultures finally had a chance to recover. The rapid decline in their numbers slowed significantly. Now vultures in Europe are facing a similar threat from this drug and similar ones.

The vulture deaths in south Asia were the result of livestock being given diclofenac shortly before they died. Birds that then went on to eat these livestock carcasses died of diclofenac poisoning as they metabolise the drug in a different way to mammals. Vets use the drug to relieve pain, fever and inflammation in sick and suffering animals. The consequences of widespread use of diclofenac were catastrophic, however. Between 1992 and 2007, 99% of India’s vultures died.

Vultures that ate carcasses contaminated with this non-steroidal anti-inflammatory drug (NSAID) died within days. After the vultures consumed tainted tissue, uric acid crystals – a symptom of gout – formed. The birds died when their severely damaged kidneys failed. ‘Vultures feed communally. One sick animal that has been given a dose of diclofenac within a few hours of dying could become a carcass that could kill many, many vultures,’ explains Mark Taggart of the Environmental Research Institute, UK.

In the 1980s, before diclofenac was available, there were tens of millions of long-billed, slender-billed and oriental white-backed vultures in India. At that time vultures were thought to be the most abundant large raptors in the world. Then, at Keolade National Park, India, vultures were spotted with necks that drooped in an unnatural way. They looked sick. Many flopped to the ground. Then more and more dead and dying birds turned up.

The reason for their demise was a mystery. Vultures were screened for disease, viruses, pesticides and infection. Researchers were baffled when all tests were negative. By the time they found out that diclofenac was the cause, long-billed, slender-billed and oriental white-backed vultures that once numbered in the millions, were on the brink of extinction.

Once the problem was identified, vets in south Asia were advised to switch to meloxicam, another NSAID and a ban on veterinary use of diclofenac was introduced in India. ‘Vulture populations appeared to be stabilising and perhaps even increasing again in some areas [of south Asia],’ says Taggart, who has been investigating vulture populations in this region. To determine how effective the ban was Taggart and his colleagues started a study in 2004. The group looked at the impact on vultures and whether vets did indeed switch medications.1

Over a six year period, the team collected 6207 liver samples from dead livestock discarded in carcass dumps. These dumps contained mostly cattle and water buffalo, but the group also sampled sheep, goats, a horse, a dog and a camel. They learned that diclofenac usage halved in three years, making the carcasses less toxic to vultures. ‘Unfortunately, large 50ml injectable vials (clearly labeled “for human use only”) remained on the market,’ says Taggart. ‘Due to habit, low price and efficacy, people still reached for these and used them illegally.’

So when Spain authorised the sale of the drug in March 2013 for veterinary use, there was an outcry. ‘Current protocols to authorise this medicine don’t take into account the lethal effects on vultures,’ says Antoni Margalida of the department of animal production, University of Lleida, Spain. ‘This demonstrates the gap between scientific publications and their application.’ Like Spain, Italy has also authorised diclofenac for use on cattle, pigs and horses. Italy exports the drug to the Czech Republic, Latvia, Estonia, Serbia and Turkey.

Roughly 95% of Europe’s vultures live in Spain. The remainder are scattered throughout Italy, Portugal and France. ‘Vultures can range over hundreds of kilometers in one day,’ says Taggart. ‘A bird could feed in Spain then die in France 24 to 48 hours later.’

Vultures weren’t the only birds that perished after consuming diclofenac-laced meat. Early in 2012, two Steppe eagles were found dead at a cattle carcass dump in India. Vets discovered both birds had gout – a telltale sign of diclofenac poisoning. ‘This could be significant for species such as Spanish imperial eagles. The total global population is already very small,’ says Taggart. ‘If diclofenac susceptibility goes beyond vultures and into eagles, this has global relevance.’

In July 2012, a lifeless griffon vulture was found at a game hunting reserve in Andalucia, Spain. The raptor had gout. Liver and kidney samples showed high levels of flunixin, another NSAID. ‘Many other NSAIDs may be toxic to scavenging birds,’ says Taggart. ‘We urgently need further safety testing data to assess this. Licensing the use of diclofenac in animals that we know can end up in the food chain of European vultures is simply too great a risk.’