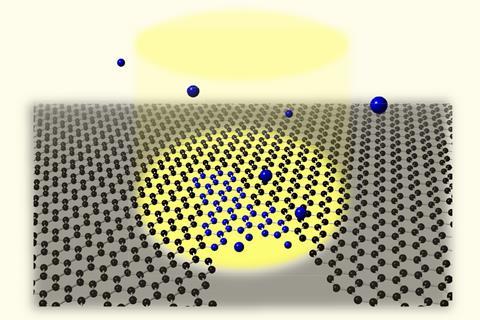 ‘This method can provide isotopic maps at atomic scale without destroying the sample,’ explains Senga. This contrasts with mass spectroscopy, which can also detect isotopes with high sensitivity but can measure each sample only once, he adds. Stem is therefore better for tracing a ‘process or reaction in which multiple measurements at the same place are necessary’, says Senga.

Conventional infrared and Raman spectroscopy collects information about substances, such as the frequency at which their bonds vibrate, using light. This can help identify the atoms bound together. But the wavelength of the light used, 800nm and over, sets the approach’s spatial resolution limit. Each nanometre could fit eight carbon–carbon bonds laid end-to-end. More recently, researchers have integrated optical spectroscopy with atomic force microscopy, Senga points out. This can enable sub-nanometre resolution, but the way the microscope’s probe tip interacts with samples usually limits this approach’s resolution to around 5–10nm. ‘We have overcome the limitation by using electrons as a probe,’ explains Senga.

The Japanese researchers used electron energy loss spectroscopy (Eels), which exploits the electrons used in Stem. ‘Vibrational spectroscopy at the atomic level is a relatively new field, but it’s by no means a new technique,’ explains Demie Kepaptsoglou from the University of York, UK. Kepaptsoglou’s team in the SuperSTEM facility in Daresbury, UK, also works on this kind of vibrational spectroscopy, but wasn’t involved in the study. The field ‘has been revolutionised in recent years by the advent of advanced monochromators’ , she explains, which Ondrej Krivanek won the Kavli Prize for Nanoscience in 2020 for developing.

In Eels, electron monochromators limit the energy carried by electrons from the microscope to a very narrow range. Scientists can detect energy lost when the electrons interact with a sample, with the losses determined by the vibrational frequency of the sample’s bonds. Advanced monochromators have narrowed the energy range sufficiently to enable spectroscopy at the highest resolutions that Stem offers. However, no-one had delivered on that atomic resolution promise, until now.

Senga and his colleagues studied cracks in graphene flakes grown on silicon nanoparticles. Electrons used in Stem can heal the cracks in the presence of methane gas, with the silicon as a catalyst. To show Eels’ atomic resolution, they made graphene exclusively from the carbon-13 isotope and healed it with carbon-12 methane.

Graphene bond vibrations shift slightly between ‘carbon-13 and carbon-12, therefore allowing us to resolve domains with different isotopic compositions’, explains Senga. That meant that his team could tell that the carbon atoms that joined the crack together were carbon-12 from methane gas, not carbon-13 from the graphene sheet. They also saw carbon bonded in pentagons, heptagons and octagons at first, before settling into hexagonal formation.

As well as capturing cracks in a graphene layer healing over three minutes, the new technique could also determine which isotopic form each atom takes.

‘This is a beautiful, very elegant piece of work, showcasing the power of analytical electron microscopy,’ says Kepaptsoglou. ‘It is really impressive microscopy, at a proof of principle scale, as most related studies currently are. As the technique matures further, one can envision future experiments where isotopes are used as markers to follow material dynamics at the atomic scale, such as phase transformations and growth.’ She adds that the new strategy will mainly be applicable to basic and fundamental research rather than applied studies.

While the technique could be used with any element in principle, in practice electron monochromator technology limits it to atoms smaller than oxygen. That’s because larger elements would need to detect atomic vibration energies with better resolution, Senga explains. His team’s next target is to distinguish hydrogen from its deuterium isotope.