Strontium and oxygen isotope analysis have shown that it wasn’t Greek soldiers that helped a city in ancient Greece defeat its enemies in 480 BC but rather foreign mercenaries, contradicting reports from contemporary historians. 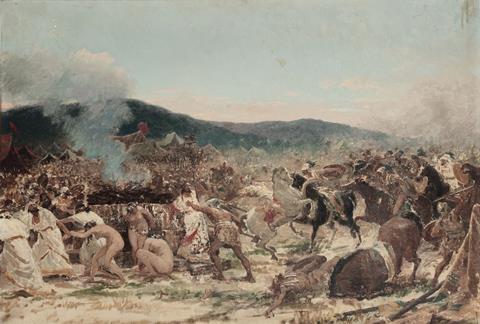 A romanticised representation of the battle of Himera in 480 BC, painted by Giuseppe Sciuti in 1873

The ancient Greek city of Himera, now located in northern Sicily, Italy, was the site of several battles between Greek forces and Carthage. Contemporary historians Herodotus and Diodorus Siculus wrote that the first battle in 480 BC was won by Himera as a result of support from surrounding Greek provinces. In contrast, the later engagement in 409 BC was reported to primarily involve only fighters from Himera itself, leading to the city falling.

To evaluate the accuracy of those reports, a team from the US and Italy examined the skeletal remains linked to the two battles. The study included 51 soldiers killed in the 480 BC battle, 11 from the 409 BC battle, and 25 non-combatant individuals from the surrounding area to establish a baseline isotope signature for the general population of Himera at the time. 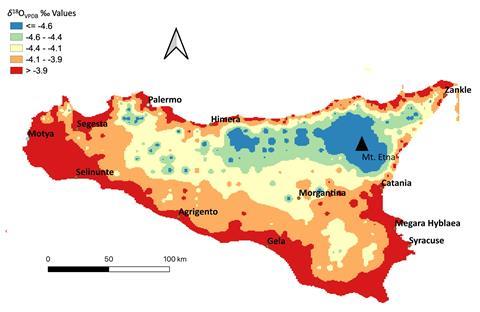 The researchers mapped the predicted oxygen-18 variability in ancient Sicily

The team focused on strontium (87Sr and 86Sr) and oxygen-18 isotopes, which are absorbed from food and water to be incorporated into bones and tooth enamel. By analysing the isotope ratios present in the teeth, the team established probable locations in which the soldiers lived when they were between one and eight years old, the time at which the enamel formed.

Their results revealed that while the 409 BC battle did involve Himeran locals as historians reported, the former battle was fought by soldiers from outside of the Greek world, likely mercenaries.