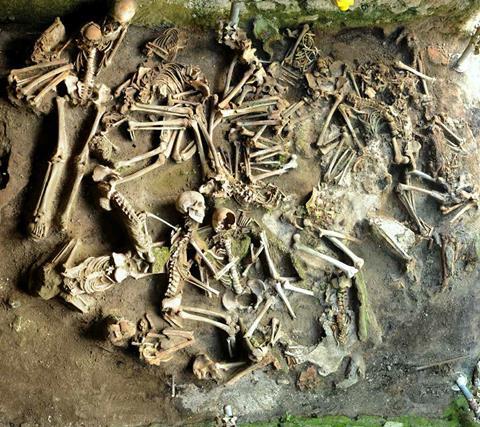 Skeletal remains of victims of the eruption of Vesuvius in 79CE. By extracting collagen from 17 skeletons the York team were able to infer the kind of diet Herculaneum residents had

Chemical analysis of human remains from an ancient Roman archaeological site has provided new insight into the diet of people living on the Italian coast almost 2000 years ago. The findings reveal a gender gap in access to certain foodstuffs among the people who lived in Herculaneum – one of the towns buried under volcanic ash during the eruption of Mount Vesuvius in the year 79CE.

A team of bioarchaeologists led by Silvia Soncin and Oliver Craig from the University of York, UK, analysed amino acids in preserved bone collagen from 17 victims of the eruption. Using a model that considers dietary sources of amino acids, as well as human metabolic pathways that synthesise them, the team were able to reconstruct diets with greater resolution than has previously been possible.

‘For example, by using the carbon isotope values of alanine, we know that we are getting information about the consumption of carbohydrates rather than proteins or fatty acids. And that’s because alanine is synthesised from the consumption of carbohydrates,’ says Soncin, who is now based at Sapienza University of Rome, Italy. ‘We also considered all the protein components of diet, and that’s particularly important if we want to detect those food sources that are really high in concentration of protein – such as fish or terrestrial animal products.’

‘By refining analyses from bulk collagen to analysis of particular amino acids, they improve the precision of estimates of diet composition,’ explains Anne Katzenberg, an expert in using stable isotope analysis to determine past diet based at the University of Calgary, Canada, who was not involved in the study. ‘In particular they demonstrate a greater reliance on marine fish than was evident from bulk analyses.’

The amino acid analysis showed that fish provided around a quarter the dietary protein consumed by inhabitants of Herculaneum, a figure that would otherwise have been significantly underestimated. The finding underlines just how important seafood was to this community, with modern day Mediterranean populations typically getting less than 10% of their dietary protein from fish.

Soncin explains that when testing archaeological remains, researchers usually have to accept certain biases – perhaps the people were ill and had altered their diets, and burial sites might span several decades or even centuries with diets that changed over time. Herculaneum, however, offers a unique snapshot into a ‘living population’ – none of these people would have died if it wasn’t for the eruption.

The research team observed differences in the importance of certain foodstuffs among the diets of men and women. ‘The most striking one is perhaps the marine consumption, because we saw that approximately 50% more proteins from seafood were consumed by the men, while the women had more limited access,’ says Soncin.

Soncin suggests that this could be because men usually occupied more privileged positions in Roman society and had more money to spend on food. ‘And probably men were more likely to be directly involved in fishing related activities – and so were most likely able to access those kinds of food sources,’ she adds.

Men also consumed more cereals, while women appear to have relied more on terrestrial animal products – not necessarily just meat, but also milk, cheese and eggs. ‘We are still reflecting on this result because it was really surprising for us,’ says Soncin. ‘Perhaps it’s just because the women had to find an equilibrium for the deficiency of fish … and so accessing animal products was a good compromise.’

‘This also has broader implications if used in other contexts where dietary differences due to sex, status or age may be of interest with respect to reconstructing past human behaviour,’ notes Katzenberg. ‘Diet reconstructions provide a window into past human behaviour and by improving their resolution, knowledge of the past becomes clearer.’

‘Compared to previous published studies of pre-modern Mediterranean individuals using bulk stable isotope analysis, I found the results suggesting a significant amount of seafood in the diet highly significant,’ adds Robert Tykot, who also studies bone chemistry and ancient diet at the University of South Florida, US. Tykot hopes that Soncin’s team can expand its analysis beyond the 17 individuals to gain a fuller picture of the diet of Herculaneum’s population. He also suggests that further studies in places like Pompeii, as well as inland Roman sites, could allow comparisons to be made between groups with different social statuses and those who might be expected to have more limited access to seafood.

Soncin says the team is already planning to dig deeper into the diets and lives of these ancient Roman communities. ‘There’s so much that we can learn about [the Herculaneum population] – for example, it would be interesting to do DNA [analysis],’ she says. ‘The Bay of Naples was a really important port in trade in the Mediterranean, so we don’t know who these people were – it is possible that they were all freedmen that were freed from slavery, coming from somewhere else in the Mediterranean.’

The team is also keen to apply the same methodology to other Roman populations. ‘There’s this kind of belief that the Roman diet was always the same – they consumed a lot of cereals, vegetables, and only small amounts of animal products and fish,’ says Soncin. ‘We saw that it’s a bit different at Herculaneum and we want to see if this is the case in other communities. If we start collecting different data, we can also see if there’s a response to people’s diet depending on the economic role of this community, or different political or cultural influences.’