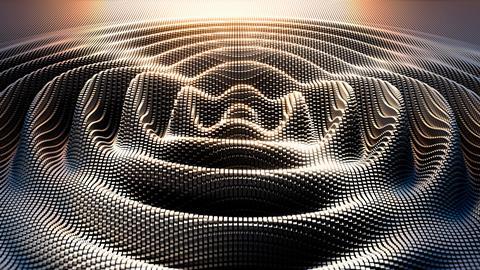 For the first time, quantum mechanical interactions between molecular vibrations have sped up the reaction between two compounds. Huilin Pan and Kopin Liu from the Institute of Atomic and Molecular Sciences (IAMS) in Taipei, Taiwan, made some vibrations of singly deuterated methane react faster with chlorine at ambient temperature using ‘quantum phase control’. ‘Our new finding expands the concept of vibrational control of chemical reactivity into the quantum regime,’ Pan tells Chemistry World.

Since the 1990s chemists have increasingly used vibrations in molecules to control how they react. Typically, this means enhancing or reducing reactivity based on changing vibrations’ amplitudes, affecting how far individual atoms are moving. Liu and Pan, instead, used more fundamental quantum mechanical properties of vibrations – specifically, Fermi-coupled vibrations.

Enrico Fermi, who famously helped develop quantum theory, and his fellow quantum pioneers established that in particles values of properties like energy vary in steps called quanta, rather than continuously. To mathematically describe particles’ wave-like quantum properties, scientists use a wave function. The wave function includes information about the wave’s phase and amplitude. 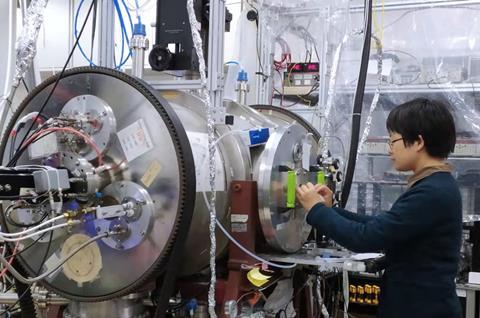 Huilin Pan sets up the time-sliced velocity map imaging apparatus in which they measured the reactivity of Fermi-coupled vibrations.

Researchers had previously changed how reactions proceed using wave function mixing in a Fermi-coupled vibration to allow one vibration to ‘borrow’ reactivity from another. Pan and Liu wanted to study how the wave function’s phase affected reactivity in a Fermi-coupled vibration. Pan suggests that no-one had previously looked at this because phase information might ‘get scrambled by the strong chemical interaction’. ‘In addition, even if the phase persists it was not clear at all how to distinguish the phase and amplitude effects from the measured results until this study,’ she says.

To get at such tiny details, the IAMS researchers used time-sliced velocity map imaging apparatus. In a vacuum chamber, they excited singly deuterated methane with an infrared laser. They then sent a beam of these molecules into the apparatus, intersecting with a beam of chlorine atoms. The colliding chemicals formed hydrogen chloride molecules and deuterated methyl radicals.

The apparatus ionises and detects products sensitively enough to distinguish vibrational states based on their intensity, allowing them to detect phase effects. Pan and Liu measured a three-fold increase in how much reactivity was enhanced in one Fermi-coupled vibration compared with the other at low collision energies.

This difference in enhancement was greater than previous reactivity-borrowing hypotheses that did not consider the wave function’s predicted quantum phase. ‘Therefore, our results actually demonstrate the shortcoming of the conventional framework,’ Pan says. However, she declined to speculate on whether the effect could ever be used synthetically.

Helen Chadwick from the University of Swansea says that chemists already knew that ‘putting similar amounts of energy into different vibrational modes can enhance reactions to different extents’. These new results ‘show that the phase between the modes also matters’. ‘It illustrates that the total effect of the vibration really can be greater than the sum of its parts,’ Chadwick says. ‘It is always exciting as a chemist to be able to exert control on the outcome of a reaction.’