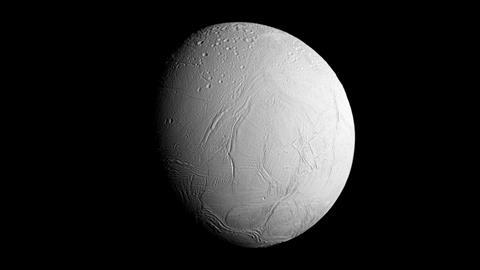 Last year, a team of scientists suggested that phosphine in Venus’s clouds could be a sign of life – a study that has now been contested by scientists proposing how volcanoes and atmospheric chemistry could have produced the compound.1 At the same time, a different study has discovered that there’s too much methane on Saturn’s moon Enceladus to come from simple geochemical processes.2 Instead, it might be produced by microbes living in hydrothermal vents deep under the moon’s icy surface.

But the discussion is complicated by the fact that life is hard to define outside the confines of our own planet. Can individual molecules be signs of life or is it all chemistry we don’t understand yet?

In September 2020, Jane Greaves at Cardiff University and her colleagues found spectral signals of what seemed to be phosphine in Venus’s clouds. Given the planet’s oxidising atmosphere, phosphine shouldn’t even exist. Any phosphorus would be oxidised to phosphate or phosphoric acid. The team explored abiotic processes that could be making phosphine but none could explain the amounts detected. To them, it was either unknown chemistry or life – after all, phosphine on Earth is a byproduct of decomposing organic matter.

But a pair of scientists didn’t agree with how quickly Greaves’ team dismissed volcanism as a source of Venus’s phosphine. Ngoc Truong and Jonathan Lunine from Cornell University, US, argue that small phosphides from the planet’s deep mantle could be brought up to the surface by explosive volcanism, injecting phosphides in clouds filled with sulfuric acid. There, they would react with the acid to form phosphine.

David Rothery, a planetary geoscientist at the Open University, UK, agrees that volcanism shouldn’t be dismissed from the debate yet. Like Earth, Venus has a history of volcanism. What could be trickier to answer is the timing – it’s unknown if the volcanoes are active now, Rothery points out . The three missions heading to Venus soon could bring the answers. Two will map the planets’ surface and one will collect samples of its atmosphere.

Attention is now shifting onto one of Saturn’s moons, Enceladus. It has an ocean under an ice crust, and at its bottom, hydrothermal vents produce plumes of material rising up through cracks in the ice and into space. In 2015, the Cassini space mission sampled these plumes, revealing substantial amounts of hydrogen and methane – so much of it that Régis Ferrière at the University of Arizona, US, and colleagues suggest it could be living organisms producing it. Having conducted computational modelling experiments, they argue that abiotic chemical processes cannot fully explain the amounts of methane measured. 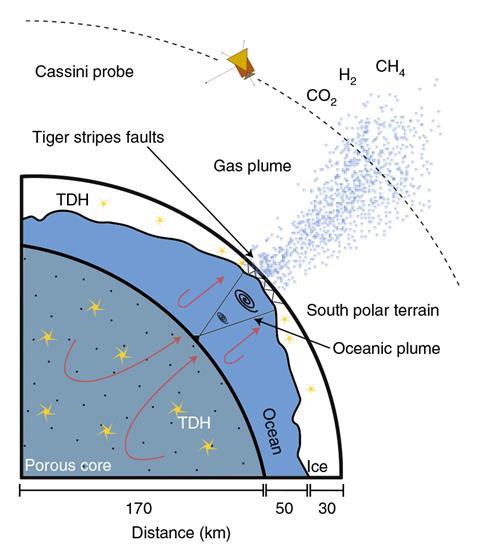 However, Lunine, who has researched Enceladus for a long time, doesn’t think the study provides many answers . ‘Methane by itself isn’t a bio signature,’ he explains. ‘We see methane in comets, we see it in interstellar medium, we see it on Titan’. He suggests that other measurements – such as carbon isotope analysis – would be required to determine whether the methane could be the result of biotic processes. According to Ferrière, scientists worldwide have been pitching missions to retrieve more data from Enceladus, but none have been funded so far.

However, to Ferrière, methane and phosphine don’t belong to the same narrative. ‘We did not consider a biotic scenario without first addressing the critical question of habitability,’ he says. ‘Life cannot exist in an environment that is not habitable. This was a serious shortcoming in the recent “phosphine story” about Venus, where the biological origin of phosphine started to be discussed without considering if Venus conditions might currently be favourable to any form of life to start with.’

In terms of habitability, Enceladus seems more welcoming than Venus. In 2018, researchers proposed that microbes that live in Earth’s hydrothermal vents could probably survive in Enceladus’s vents, too. Venus, on the other hand, seems to be too hot – almost 500°C on average – and too dry to harbour life.

To Lunine, the reason proving life on other planets is so hard could be because researchers have been focusing on single molecules as biosignals. ’To really identify whether life is present, without actually capturing it and looking at cells, you have to look at a wide suite of chemical compounds,’ he suggests.

On the other hand, Greaves’ colleague Janusz Petkowski, an astrobiologist at the Massachusetts Institute of Technology, US, says that those looking for life are often too Earth-centric. ‘You have to be ready to find something unexpected,’ he says. ‘You must be ready to find life adapted to those specific environments.’

It remains unclear what exactly makes life, life. ‘What are the essential functions that would lead us into calling something an exotic chemical or a second type of life?’ Lunine asks. ‘People don’t agree 100% on this for sure.’

For now, the answer to whether single molecules like phosphine and methane are biosignals remains cloudy. But even if they end up being simply signs of novel chemistry, the community shouldn’t be disappointed, Lunine says. ‘Chemistry in our universe is wonderful even without life.’