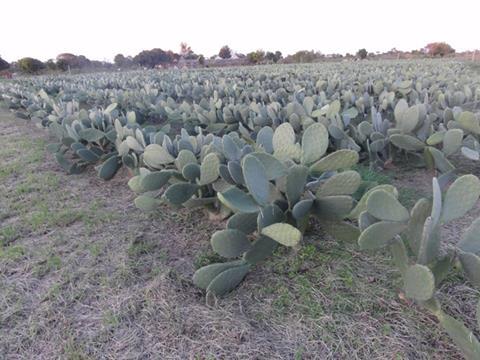 Prickly pears are being trialled as a biogas feedstock.

New analysis from UK researchers suggests a previously overlooked group of plants could be key to providing sustainable bioenergy for the future.

Traditional biofuels such as bioethanol are made from food crops like corn and sugarcane that require prime agricultural land – a commodity in relatively short supply. Competition between food and fuel crops means that large scale bioethanol production is therefore controversial.

But plants that perform photosynthesis through a crassulacean acid metabolism (CAM) system may enable bioenergy production without disrupting food supplies. CAM plants are adapted to grow on arid and semi-arid land, where low or unpredictable rainfall makes conventional agriculture difficult. Semi-arid land is estimated to take up 12–18% of the world’s land area and while some of this is already used for farming, much of it is relatively unproductive grazing land. CAM plants can flourish here by conserving water more effectively than traditional crops – they capture carbon dioxide from the air at night and convert it to malate, which fuels photosynthesis during the day. By avoiding the need for gas exchange during the day, they reduce evaporative losses through their leaves and so require much less water per unit of biomass than other plants.

Though well known, CAM plants have barely been studied as potential bioenergy crops. However, new analysis by researchers from the University of Oxford, Tropical Power, Imperial College London and the Royal Botanic Gardens at Kew, say that CAM species like Opuntia ficus-indica (prickly pear) and Euphorbia tirucallli could make a huge contribution to sustainable biogas production.

Bioenergy entrepreneur Mike Mason, who led the work, explains that electricity production from biogas is incredibly flexible, ‘you can bring it up or down as demand goes up and down. The problem is that there isn’t much resource to turn into biogas and it’s horribly expensive.’ But CAM plants, which can be grown cheaply on marginal land, have the potential to change this.

Mason estimates that it would take between 4% and 12% of available semi-arid land to generate 5PWh of electricity per year, equivalent to that generated from natural gas. The products of anaerobic digestion, nutrient rich wastewater and solid digestate, can be re-used for irrigation or as fertilisers. The wastewater could also be used for highly productive forms of aquaculture – potentially increasing food production from land growing biofuels instead of decreasing it.

‘This is a valuable synthesis of the literature and new data,’ notes biofuels expert Richard Murphy from the University of Surrey, UK. ‘They make a positive and optimistic case.’ However, he cautions that careful consideration needs to be given to issues such as nutrient cycling, electricity infrastructure and conservation management to ensure the long-term sustainability of such agro-ecosystems.

Although some CAM plants such as pineapple and agave are already cultivated on a large scale, they are not currently employed for biogas production. ‘There is no doubt that plant science and breeding improves crops,’ says Mason, the problem is that ‘we are with CAM plants where we were with cereal crops 10,000 years ago.’ But with increasing research interest and sustainable electricity in ever greater demand, that situation might change quickly.