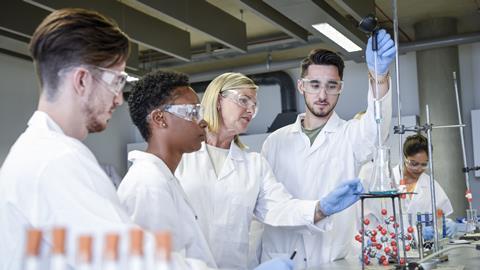 In a move criticised by employers and professional bodies, the academic qualification that used to come with completing an apprenticeship in England has been quietly removed. Without a qualification, chemistry apprentices could find it difficult to progress to advanced programmes or find employment.

In 2020, the Institute for Apprenticeships and Technical Education (Ifate) revised the standards for the laboratory technician apprenticeship. It replaced the mandatory qualification – such as a BTEC in Applied Science or a higher national certificate – with a requirement for learners to be familiar with ‘theoretical knowledge of [a] named/recognised scientific subject appropriate to the workplace and sector’.

This means some training providers could continue to offer programmes during which apprentices gain a qualification, while others leave learners without one. For the latter group, there’s no guarantee they will study basic chemistry topics such as the periodic table, explains Toby Underwood, accreditation and careers manager at the Royal Society of Chemistry (RSC). ‘If there is no structure to the knowledge given during the apprenticeship, it does not bring consistency as training providers may deliver variable content to differing levels,’ he says.

‘By reducing the mandatory requirements, and therefore reducing the need for consistency, there is a danger training providers will start to provide the bare minimum,’ Underwood adds. ‘The removal of the qualification could start a race to the bottom for quality provision as training providers create the most cost effective alternative, with limited guidance.’ The total funding available from government for apprenticeships of this type is £21,000.

‘With this move, it is unclear how knowledge would be demonstrated to an organisation when assessing someone for a role,’ adds Kim Hardman, associate director and UK apprenticeships lead at AstraZeneca. ‘If a professional qualification isn’t given in this apprenticeship, it is doubtful that we would consider using it.’

Other companies have had similar thoughts. An RSC survey of 31 science employers found that 90% wanted apprentices to be recognised with a qualification. 84% believe that not having a qualification might jeopardise apprentices’ job prospects.

Ifate’s decision was taken after a group of employers reviewed the standard. Minutes from one of the group’s meetings in June 2019 show that there was no consensus on what level the qualification should be mandated for – hence it was the group’s view that it should not be mandated at all. The group also carried out a public consultation, though minutes from a meeting in late 2019 show that they received no responses. ‘I think the apprenticeship should be opened up for review with a wider employer consultation conducted by the Ifate with input from stakeholders such as professional bodies,’ Underwood says.

Whatever happens Underwood says that the ‘RSC remains committed to supporting chemical science apprentices’. ‘Regardless of the actions of Ifate, as the professional body for those apprentices the RSC will continue to provide the necessary guidance to this important sector of learners.’

‘Employers define the knowledge, skills and behaviours that apprentices must learn to prove occupational competency and the end point assessment is the key mark of quality for apprentices and employers,’ an Ifate spokesperson tells Chemistry World. ‘Giving employers the guiding hand with framing the learning requirements is the best way of ensuring the apprenticeship meets sector needs and sets apprentices up for successful careers.’

‘The biggest risk is the onward progression of the apprentice being negatively impacted,’ Underwood says. Hardman explains that if someone who had completed an apprenticeship without qualification applied for a lab technician job at AstraZeneca ‘we would need to insist on a more in-depth interview process and possible competency assessment prior to offer. However, if they were being shortlisted for an interview against others who had qualifications, they would be unlikely to reach the assessment stage.’

A range of options

Samantha Booth who leads the University of Greenwich’s chemistry apprenticeship programme, adds: ‘Unless [students] did have a recognised qualification as part of that level 3 [laboratory technician apprenticeship], they wouldn’t necessarily be able to go on and study further for something that requires that entry qualification.’

‘It’s about having a range of career progression options,’ says Tyler Harvey-Cowlishaw, a laboratory scientist apprentice who completed an apprenticeship before the standard was changed. ‘If I train in a specific lab, I’m only trained in the specific skills for that area, whereas if I’ve got the qualification on the side, I can then jump into a different lab somewhere else,’ she points out.

On the plus side, says Harvey-Cowlishaw, the change means that ‘your employer can put you through a qualification that maybe is more specific to your workplace. It also means that maybe a learning provider can make the qualification more applicable to the apprentices they have.’

So far, ‘we’ve not really seen a change in the type of student that’s coming through’, says Booth. However, she has seen a shift in employers putting competent students straight onto the five-year degree apprenticeship programme rather than starting off with a two-year apprenticeship as a stepping stone to a three-year degree. Employers have started to realise that the additional assignments and assessments apprentices have to complete in the latter case are an unnecessary burden, Booth explains. ‘In my eyes, the old system worked,’ says Booth. ‘I don’t really know why they changed it. The apprentices work so hard, and so many people out there don’t understand what this level of apprenticeship means. I just wouldn’t want to see that loss of qualification start to affect the quality of the students coming through.’